A mobile student card is already available at UW. This is an electronic version of a student document with the same legal value as its traditional version. To download it, one should first install the Mobile USOS and “mObywatel” applications on their smartphone.

At the end of December 2019, the University of Warsaw and the Ministry of Digital Affairs signed an agreement regarding the issue of mobile student cards. It is a mobile version of the document confirming the status of a student and entitling to the use of statutory discounts. Its launch is possible thanks to the free public application “mObywatel”. After integrating this system with Mobile USOS, and connecting its production environment with the university system, it is possible to install “mLegitymacja” on a mobile device. Temporarily it will be supported only by the Android operating system. 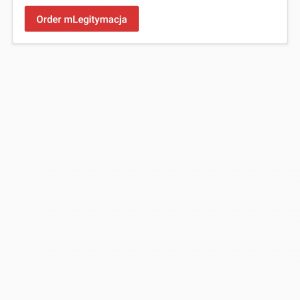 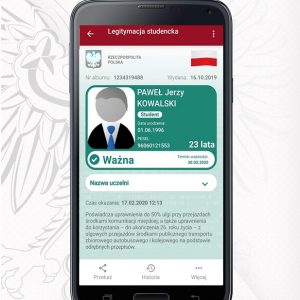 It is worth to emphasize that it is the student who decides whether and when to install “mLegitymacja”, he or she carries out all the steps independently without the interference of the university administration.

For a mobile student card can apply students:

Applications are successively transferred to the “mObywatel” system through USOS. After their completion, the Mobile USOS application will show a notification about the possibility of downloading “mLegitymacja” thanks to the QR and activation codes received. One “mLegitymacja” can be installed on only one phone.

The mobile student card is a full-fledged equivalent of the plastic ELS. This does not mean, however, that the obligation to have a traditional document disappears. “mLegitymacja” has a complementary function. It allows, for example, to confirm the status of a student when a given person does not have ELS with them.

The “mLegitymacja” module in Mobile USOS is available in Polish or English.

Mobile USOS application
03-10-2018
A mobile version of USOS for students and employees of the University of Warsaw, the Mobile USOS UW, is already in the Google Play Store. The application is available in the Polish and English language versions, and it is free.
Information meeting for international students
14-02-2020
On 17th February, a new semester will begin. About 370 of international students will start their education at the University of Warsaw. They came here for short-term Erasmus+ and other international exchange programmes. The UW International Relations Office organised a special meeting for them on 12th February.