Main siteAbout UniversityMust-see at the University

The university life concentrates in three campuses: Central, Ochota and Służew, located in different districts of Warsaw. The University’s historic seat, located in the heart of Warsaw, is widely appreciated for its elegant architecture. Impressive edifices, dating back to 17th century, rank high among Warsaw’s sightseeing musts. The University Library, built in the vicinity of the main campus at the turn of this century, has opened a new chapter in the University’s architectural design. The new facilities built since then are not only modern and functional but also architecturally intriguing. The natural science departments’ campus has recently gained imposing new buildings, housing state-of-the-art laboratories. These facilities provide their users with comfortable work and study areas, and interestingly arranged recreational spaces.

26/28 Krakowskie Przedmieście St. – this address is familiar to everyone connected with the University of Warsaw: it is the Main Campus. This historic enclosure is one of the most enchanting areas of Warsaw. Beautiful sculptures decorating the buildings and the greenery the surrounds them make the Campus one of the most pleasant and often visited locations, and a favourite among both tourists and the residents of Warsaw. The Main Campus and its vicinity are home mainly to the Humanities and Social Sciences faculties. 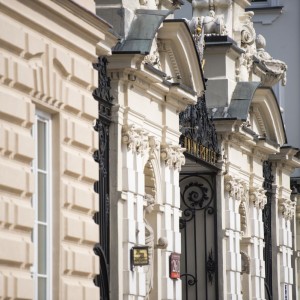 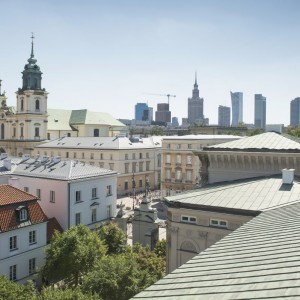 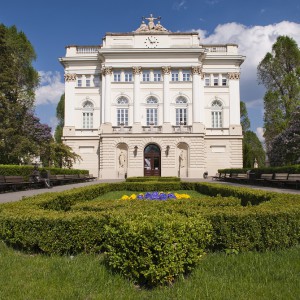 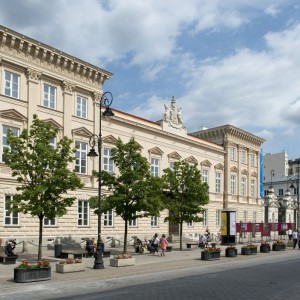 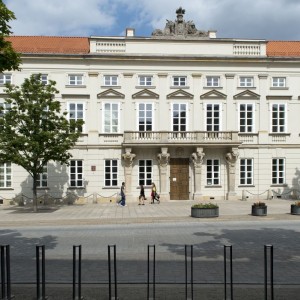 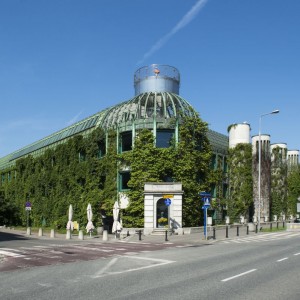 Leading to the campus from Krakowskie Przedmieście is one of the University’s chief symbols. The University coat of arms was placed on it in October 1916, that is five years after it was constructed; it is a crowned eagle surrounded with five stars, which symbolise the first five faculties of the University: those of the Law and Administration, Medicine, Philosophy, Theology, and Fine Arts and Sciences. The gate’s niches hold statues of Athena and Urania, the first holding a helmet, the other a globe. Thus, entering the Warsaw University campus enclosure, we find ourselves under the protection of goddesses of wisdom and knowledge about the universe.

Was built in 1894. It was extremely modern for its time: the library was able to hold 750,000 volumes, and the large storage space resembled a huge steel grille. The venerable building was emptied in 1999, when the new Main Library opened at Powiśle. Subsequently it was thoroughly rebuilt; in effect, the building now merges architectural modernity with tradition. Currently it contains lecture rooms. Fragments of the impressive steel construction are still visible in the former storage space of the Library. An interesting fact is that during the 2nd World War Czesław Miłosz, the future Nobel Prize laureate, worked in the Old Library as a janitor.

The University’s oldest building, was constructed before 1643. Standing at the edge of the slope running down towards the Vistula, it was initially the summer residence of the kings of Poland: Władysław IV, Jan Kazimierz, who gave the palace its name, and Jan III Sobieski. In the 18th century, King Stanisław Augustus Poniatowski put the entire property to a completely different use: instead of being a residence, the palace became headquarters of the Noble’s School, an academy for young gentlemen. The building was handed over the education authority board only in 1808. The palace was bombed and burnt out in the Second World War. Rebuilding works were concluded in 1954; the architect modelled the restoration on design drawings dating from ca. 1820. Today, it is the headquarters of University authorities.

Dates from the inter-war period. The Second World War left it in ruins, and its main lecture hall was used as stables. It was rebuilt in the 1950s. Four beautiful Ionic columns at the main entrance porch give it a neoclassical feel. The building contains offices and the University’s largest lecture hall, which has the seating capacity of nearly 1200.

The University of Warsaw Library

The building is located close to the Vistula bank. Since its opening in 1999 it has been one of the greatest architectural and tourist attractions of Warsaw. The combined collections of the University Library and the forty-seven other faculty libraries hold over 5.8 million volumes. The Library has 3,500 visitors per day, which amounts to over a million per year. It is also a venue for exhibitions and other cultural events. The Library has also one of the largest roof gardens in Europe. 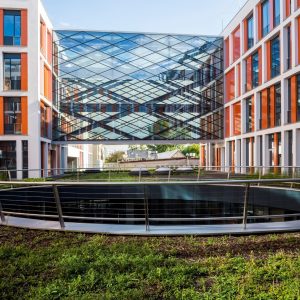 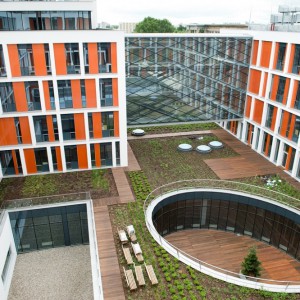 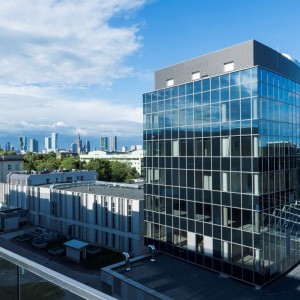 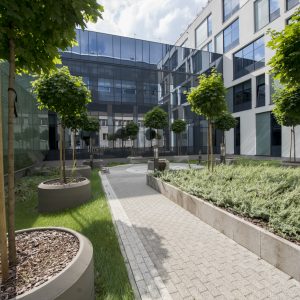 The University’s Służewiec campus, located farthest to the south, is the home to the Faculty of Management and a part of the Faculty of Applied Linguistics buildings. It is scheduled to include the University Halls of Residence complex. 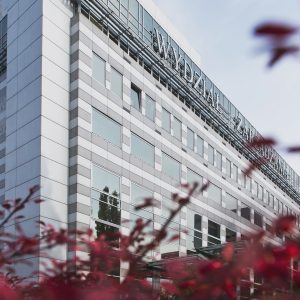 Guests interested in visiting our historical campus, can attend tours offered by the University of Warsaw Museum. To arrange a tour, call (+48) 22 55 20 107 or email muzeum.uw(at)adm.uw.edu.pl

Tourist attractions of the UW – guidebook (2018) 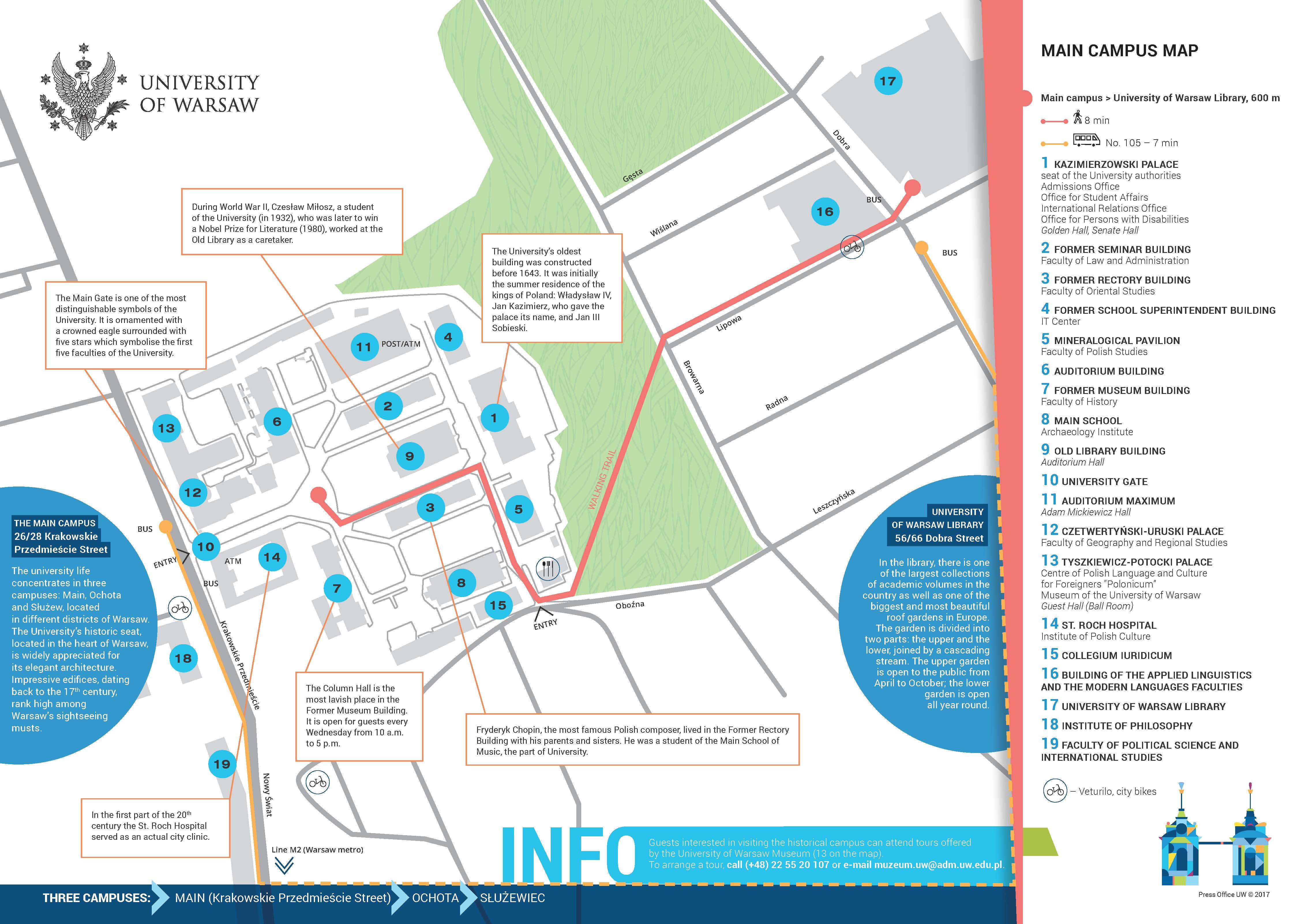 For international students and employees: 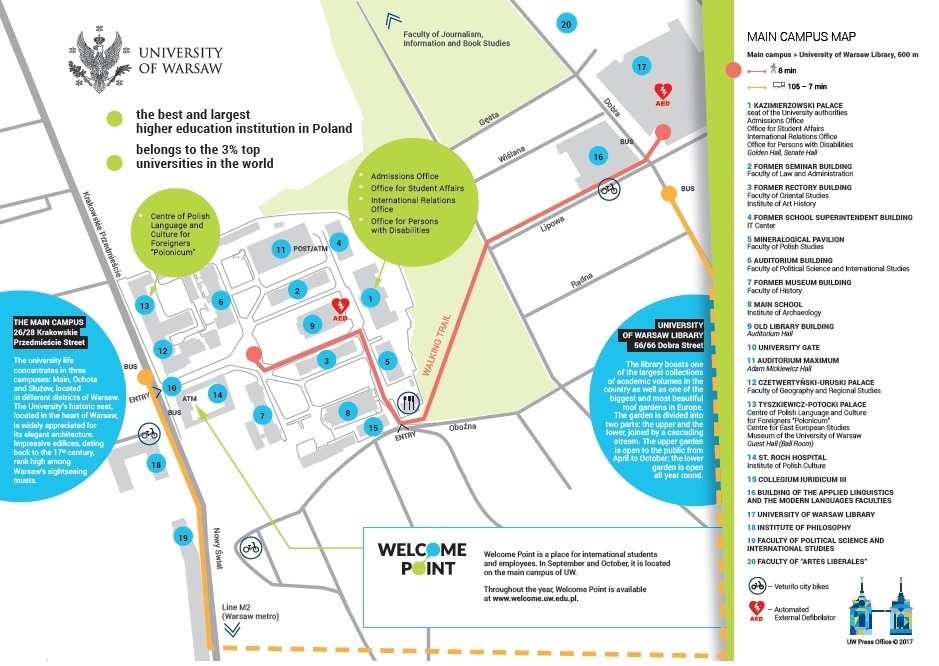 More materials about the University of Warsaw >>

The University of Warsaw Library