Main siteNewsA new interpretation of the origin of dinosaurs

A new interpretation of the origin of dinosaurs

Palaeontologists from the UW Faculty of Biology have provided evidence that dinosaurs evolved directly from four-legged ancestors. Previously, it was believed that dinosaurs were evolved from two-legged animals. The results were published in the Journal of Anatomy.

Dinosaurs and birds belong to the same evolutionary branch. It separated from the crocodile lineage during the Triassic period (250 million years ago). Both groups started their evolution from the stage of limbs directed to the body sides and gradually pulled them towards the middle. However, this was achieved in quite different ways.

The femur usually retained its original orientation in the crocodile branch, but some of its members have their hip joints turned down. In the lineage ancestral to dinosaurs the femur gradually became almost vertical so its head entered the hip laterally. In result, these creatures started to run on two legs, and eventually they won the evolutionary race with crocodile-like reptiles. 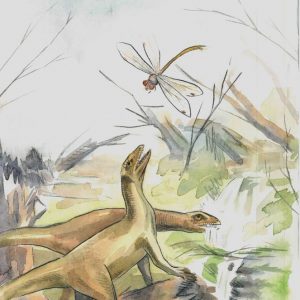 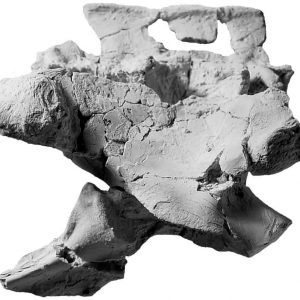 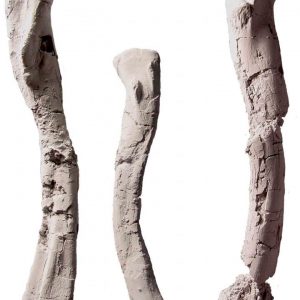 In 2003, Professor Jerzy Dzik (now at the Faculty of Biology of the University of Warsaw) described a new dinosaur-like (dinosauriform) reptile from Krasiejów near Opole on the basis of several hundred well-preserved bones. He called it Silesaurus opolensis. The animal lived about 230 million years ago and did not resemble other dinosauriforms known at that time. It had long and slender forelegs and was reconstructed as four-legged.

The discovery divided the scientific community. Most vertebrate palaeontologists considered Silesaurus as being secondarily adapted to four-legged locomotion. Others believed that this was a primitive trait.

The aim of the project of young researchers from the University of Warsaw was to determine what was the relationship of the Silesaurus locomotion style concerning the early evolution of birds. Its well-preserved articular surfaces and muscle attachments enabled the reliable restoration of the body posture and range of limb movements.

“We would like to make Silesaurus a model organism in the study of dinosaurs. Until now, the American Tyrannosaurus rex holds the palm of precedence in such investigations. We think, however, that our Polish material has a chance to contribute more to the understanding of the early evolution of dinosaurs than its American cousin. Many aspects of the Silesaurus anatomy, physiology and behaviour have already been determined during previous works of our team. Many others are under development,” says Rafał Piechowski, a PhD student at the Department of Paleobiology and Evolution of the University of Warsaw, one of the authors of the article that has recently appeared in the Journal Anatomy.

Researchers from the University of Warsaw found that the Silesaurus forelimbs were fully straightened and had reduced muscles responsible for extension, retraction and bending. Such anatomical adaptation is known also in early sauropods – long-necked four-legged dinosaurs. Like Silesaurus, their forelimbs served as a support for the front of the body. Those very large and heavy retiles did not have to be afraid of predators and could remain to be slow animals.

Silesaurus, on the other hand, was the size of a large dog and had no other way to avoid predators, except for escaping them. It relied mainly on its hind legs. In fact, the femur of Silesaurus was only slightly bent and the acetabulum of the pelvis pointed downwards. In result, both legs were under its trunk.

“Such adaptation has been known so far only in representatives of the crocodile evolutionary branch. Instead of the strongly developed iliofemoralis muscle, which dominates the dinosaur pelvis, Silesaurus  had extensive extensors and knee flexors. Its hind limbs were thus well adapted to perform the main locomotory function, but in an earlier unknown way,” explains Rafał Piechowski.

However, the researchers underline that the locomotion of the silezaur was not unique within the bird lineage. According to them, all dinosauriforms — not just Silesaurus — had forelegs tucked under the torso, acting as a support. This interpretation is confirmed by Triassic trackways of probable pre-dinosaurs.

The palaeontologists from the University of Warsaw believe that all pre-dinosaurs — not only Silesaurus — had their forelegs below their bodies.

“We claim that the generally accepted hypothesis on the dinosaur origin is incorrect. Dinosaurs evolved directly from four-legged animals. Due to bipedality, the forelegs were freed from the locomotory function and could be used for new purposes. That is why later dinosaurs rebuilt the muscles responsible for ejection, retraction and bending of the appendages,” stresses Dr Mateusz Tałanda from the Department of Paleobiology and Evolution of the University of Warsaw, co-author of the article.

The paper in Journal of Anatomy

Piechowski R., Tałanda M., “The locomotor musculature and posture of the early dinosauriform Silesaurus opolensis provides a new look into the evolution of Dinosauromorpha”, Journal of Anatomy: https://doi.org/10.1111/joa.13155

New “Nature Human Behaviour” publication co-authored by the researcher and student from UW
29-01-2020
Prof. Michał Bilewicz from the Center for Research on Prejudice at the UW Faculty of Psychology and Olga Kuzawińska, a student of this faculty, are co-authors of the publication, which appeared on 27th January in "Nature Human Behaviour". The work concerns the impact of intergroup contact on support for collective action against discrimination among minorities and majorities.