The world has a quantum nature. It is seen in a significantly lowered temperature. When gases of atoms are ultracold, their interactions can be monitored. Scientists from the Faculty of Physics at the University of Warsaw led by Prof. Michał Tomza, together with the experimental group of Prof. Tobias Schaetz from the University of Freiburg, were the first to observe Feshbach resonances between single ion and ultracold atoms. The results of their work have been published in “Nature”. The article has also been highlighted on the journal’s cover.

The quantum nature of the world can be observed in the ultracold conditions. Ultracold gases of atoms cooled to a fraction of a degree above absolute zero are an example of quantum matter. The interactions between atoms can be controlled using electromagnetic fields and the phenomenon of Feshbach resonances. Scientists from the University of Freiburg and the Faculty of Physics at the University of Warsaw were able to observe and explain such resonances between a single ion and ultracold atoms for the first time.

The results of the many years of their work have been published in “Nature”, one of the world’s most prestigious scientific journals. Furthermore, the article has been highlighted on the cover as the most important material in the issue.

The UW scientists conducted a theoretical analysis of the phenomenon while the research study was performed by the team from the University of Freiburg. The Polish team of theoretical physicists included: Prof. Michał Tomza together with the members of the Quantum Molecular Systems group: Dariusz Wiater (doctoral candidate) and Agata Wojciechowska (Master’s student), and Dr Krzysztof Jachymski, leader of the Ultracold Atomic Systems group.

“Impossible to observe on a daily basis, the world at its foundations is of a quantum nature. To reveal its non-classical character, it is helpful to dramatically lower the temperature. This allows for phenomena like superfluidity and superconductivity. Ultracold gases of atoms cooled to a fraction of a degree above absolute zero are an example of quantum matter. Under such conditions, the interactions between atoms can be controlled using electromagnetic fields and the phenomenon of Feshbach resonances”, explained Prof. Michał Tomza from the Faculty of Physics at UW.

When the energy of molecular states is adjusted to the energy of colliding atoms, magnetic Feshbach resonances significantly increase the frequency of collisions. In the experiment they were observed as an increase in the probability of ion loss as a result of its reaction with pairs of atoms for specific values ​​of the magnetic field. Scientists were also able to demonstrate an increase in the frequency of two-body collisions near the resonance, which effectively allows to cool the ion. The theoretical analysis of Polish scientists allowed to determine previously unknown interaction parameters and to predict the position of resonances, which were not initially detected in the experiment.

An open path for new experiments

Ultracold ion-atom systems have many potential applications in quantum computing and simulations. The results obtained by physicists open the path for the next generation of experiments in which the quantum state of the ion will be much easier to control. The lower energy and longer life of the ion will allow to explore new phenomena and to create interesting states of quantum matter, which on the one hand will help to better understand the quantum nature of the world, and on the other hand will be another fundamental element of emerging quantum technologies. It can be expected that in a short time Feshbach resonances between an ion and atoms will be observed for other combinations of elements.

Funded under the NCN’s OPUS programme and entitled “Ultracold quantum mixtures of ions with atoms, molecules, and Rydberg atoms: novel hybrid systems and applications”, the research project published by “Nature” was carried out in 2017-2021 by a research team at the University of Warsaw, which also included Dariusz Wiater, a Phd candidate, Agata Wojciechowska, an MSc student, and Dr Krzysztof Jachymski, a member of the Faculty of Physics, University of Warsaw, in cooperation with researchers from the German research centre.

The article in “Nature”:

Observation of Feshbach resonances between a single ion and ultracold atoms

How to weigh an invisible object?
A Ceremonial Renewal of the Doctorate of Prof. Ewa Wipszycka-Bravo
Tags: Faculty of Physics, Nature, science

How to weigh an invisible object?
13-12-2021
Scientists from the Astronomical Observatory of the University of Warsaw (OAUW), in collaboration with a global team of astronomers, observed the brightening of a star due to the passage of a dark object close to the path of light rays. Thanks to the phenomenon of gravitational microlensing, it was possible to weigh an invisible object with surprisingly high accuracy. Its mass is slightly greater 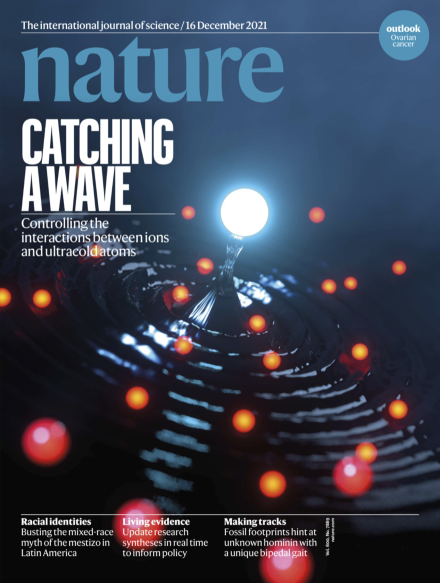