How to weigh an invisible object?

Scientists from the Astronomical Observatory of the University of Warsaw (OAUW), in collaboration with a global team of astronomers, observed the brightening of a star due to the passage of a dark object close to the path of light rays. Thanks to the phenomenon of gravitational microlensing, it was possible to weigh an invisible object with surprisingly high accuracy. Its mass is slightly greater than that of the Sun.

Warsaw astronomers noted an unusual brightening of a star in the daily portion of data observed by the European space mission Gaia on April the 18th, 2019. – We decided to look closely at this event, named Gaia19bld, hoping for a very strong signal amplification in the coming days. We used ground-based telescopes on different continents and the NASA Spitzer Space Telescope, comments Krzysztof Rybicki, PhD student at OAUW, the main author of the analysis in one of the publications on the Gaia19bld event.

Astronomers speculated that it would be possible to register changes in the structure of images of a light source (star) in the microlensing phenomenon. The motion and rotation of the images, although well-defined theoretically, had never been directly observed before. – We predicted how big and wide the maximum brightness will be. In cooperation with other astronomers, primarily our colleagues from Sorbonne in Paris and the University of Heidelberg, observations with the world’s largest telescopes were carried out. For the first time, we were able to register not only two separate images of the source, but also a change of their position during the lensing phenomenon. Such a theoretical effect results directly from Albert Einstein’s General Theory of Relativity. It is worth noting that the idea of large-scale  microlensing surveys, which sprouted at the beginning of the 90s, came from  an outstanding Polish astronomer, a graduate of the University of Warsaw, prof. Bohdan Paczyński – adds Rybicki.

Solar-like star or a black hole?

Thanks to the observations carried out with the telescopes located in Africa, Australia and South America, and the involvement of many observers from around the globe, astronomers have collected numerous and very precise data that allowed them to accurately determine the mass of a dark object, called the lens, that causes brightening of a distant star. We have measured with great accuracy that the discovered dark object is slightly more massive than the Sun, but we are still not sure what it is – comments Prof. Łukasz Wyrzykowski, head of the group operating at the OAUW, responsible for the organisation of a network of ground-based telescopes studying the phenomena detected by the Gaia satellite. – If it is an ordinary star, we will find out in a few years, when the source and the lens separate on the sky. An alternative solution is a more exotic object, such as a neutron star or a black hole. It seems, however, that the lens in the Gaia19bld phenomenon is too light for this scenario to be true. Nevertheless, thanks to the gravitational lensing method, we gain a tool to detect black holes in other similar phenomena – adds prof. Wyrzykowski. 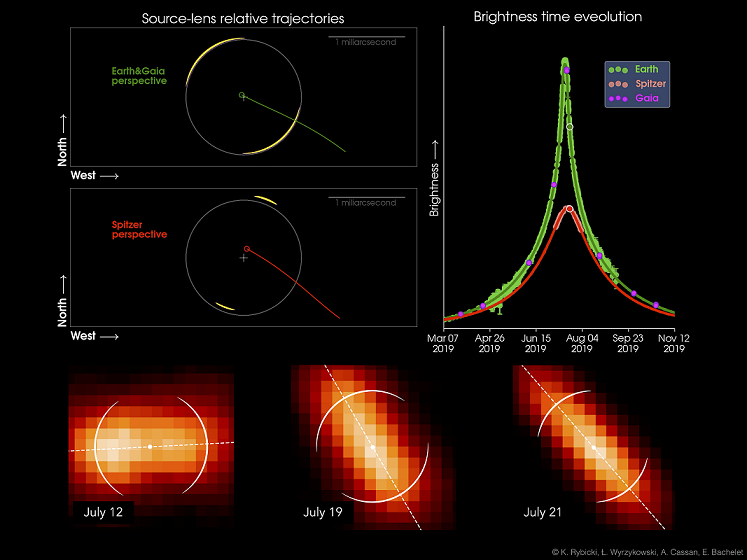 For the first time it was possible to directly observe the motion of images during the microlensing event.

Link to the animation >>

The brightening of the source star, thanks to which the mysterious dark object could have been studied, was observed for almost a year by telescopes of various types and sizes. The monitoring involved both space telescopes belonging to the largest agencies, such as Gaia (European Space Agency) and Spitzer (NASA), as well as ground-based telescopes of various apertures: from 8-meter telescopes belonging to the European Southern Observatory (ESO), to small robotic telescopes operated by astronomy enthusiasts. Part of the key data was collected by the Polish Optical Gravitational Lensing Experiment (OGLE) project, which uses the Warsaw Telescope located in Chile. This is an excellent example of cooperation between various space agencies, but also between scientists and astronomy enthusiasts – comments Prof. Wyrzykowski. More and more often, significant astronomical discoveries are the result of the cooperation of many research groups using instruments located in different places on the globe. This ensures the possibility of observing phenomena without interruption, because the appropriate observation conditions always prevail in at least one of the observatories – explains the astronomer. 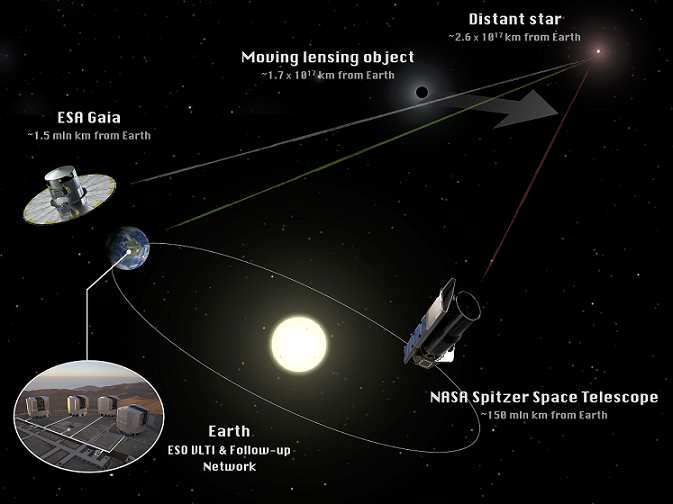 The microlensing phenomenon occurs when an object with a non-zero mass (usually a star) is placed between a distant background star and the observer. In such a situation, it can act as a lens, amplifying the signal coming from the source, which results in its brightening. The Gaia19bld event was observed with many different instruments, including the Gaia satellite, numerous ground-based observatories, and the Spitzer Space Telescope, which orbits the Sun at a considerable distance from Earth. As a result, the phenomenon was viewed from different angles, which allowed us to collect additional information about the lens and better characterise the event. Image credit: K. Rybicki, L. Wyrzykowski, A. Cassan, E. Bachelet.

The results of the astronomers’ research have been published in three scientific articles, in the journals “Nature Astronomy”: (Microlensing mass measurement from images of rotating gravitational arcs) and “Astronomy & Astrophysics”:

The research of the Polish team is financed by grants from the National Science Centre and by the European Commission from the Horizon 2020 programme.

Pink Boxes in UW
10-12-2021
The University of Warsaw takes part in the nationwide campaign against period poverty. The so called ”Pink Boxes” are installed in a number of UW sites. Each box is equipped with free sanitary products for any girl, woman and person who menstruate. The action is co-organised with the Pink Box Foundation.