Main siteNewsTyre: Discovery of a new Roman Temple in the Phoenician port in Lebanon

Tyre: Discovery of a new Roman Temple in the Phoenician port in Lebanon

Tyre, the Phoenician capital on the coast of Lebanon, is the site of the latest project with PCMA UW involvement. The international team researching this UNESCO World Heritage List city has recently finished a highly successful fieldwork season discovering the remains of a complex belonging to a Roman-period temple.

In 2020, the Polish Centre of Mediterranean Archaeology, University of Warsaw (PCMA UW) joined forces with Lebanese and Spanish colleagues who had been researching the site of Tyre since 1997 to form the Lebanese-Spanish-Polish Archaeological Expedition in Tyre. The expedition is headed jointly by Prof. María Eugenia Aubet (Pompeu Fabra University of Barcelona), Dr. Ali Badawi (General Directorate of Antiquities of Lebanon) and Dr. Francisco J. Núñez (PCMA UW). The project involves archaeologists and specialists from Lebanon, Spain, Poland, Italy, Portugal, France and Greece.

PCMA UW expeditions have been working in Lebanon since the 1990s, researching the agricultural hinterland of Sidon, a city north of Tyre. Polish scholars involved in those excavations were keen to participate in explorations of one of the major sites of the region.

The city of Tyre was one of the most significant economic centers of the Mediterranean world throughout much of Antiquity. Settled since the Bronze Age (3rd millennium BCE), it was located on an offshore island, eventually joined to the shore by a causeway built by Alexander the Great. In the Bronze and Iron Ages it was a thriving hub of Phoenician commerce, industry and crafts. It features prominently in written sources (including the Bible) as one of the crucial economic and political centers that the powers of the age – be it the Assyrians, Egyptians or the kings of Israel and Judea – needed to reckon with. It was mainly from Tyre that Phoenician settlers set sail to the western Mediterranean, founding commercial center of Cádiz, or the renowned Carthage which challenged the Romans in the Punic wars. Tyre retained its importance throughout most of the succeeding periods, and still is among the largest cities of Lebanon.

From an archaeological perspective, the almost-five-millennia of uninterrupted occupation make Tyre both a fascinating object of study and a difficult one. “The superimposed architectural remains, along with natural catastrophes, the rise of the sea level and the dynamic land development and public works in the recent decades efficiently obscured the character of ancient architecture,” admits Dr. Francisco J. Núñez.

Although Lebanese excavations in Tyre started back in the 1960s, most of the documentation vanished among the turmoil of the civil war that broke out in 1975. Moreover, much of that work concentrated on the Classical and Medieval levels. “Given the historical importance of Tyre in the Bronze and Iron Ages, we really have very little archaeological evidence from those periods,” explains Dr. Núñez, adding. “In point of fact, our knowledge of the ancient city is largely restricted to glimpses of Roman and Byzantine remains that are now concentrated in two archaeological parks: at the sites of al-Bass and the Basilicas.”

One of the objectives of the current project is to shed light on the nature, history, and evolution of urban planning in the ancient island. The currently excavated area lies in the Tyre Acropolis, presumably the highest point of the ancient island. The 1970s excavations there revealed structures of all periods that are still in need of interpretation, but also left behind deep soundings which yielded crucial stratigraphic sequences.

The team has analyzed the excavated remains and found that they have a number of architectural features and finds, such as Greek and Phoenician inscriptions, that point to a sacral character of the investigated area. According to Dr. Núñez, the cult-related nature of this area is particularly evident from the Roman period onwards, until it got destroyed in the early Byzantine times. “Regarding the Iron Age, this character is not fully confirmed yet but the Iron Age structures we have found so far seem to be standing on a platform, which is a clear hallmark of sacral buildings,” he adds.

News from the field

The current season’s work involved archaeologists and specialists from Lebanon, Spain, Poland, and Portugal. Researchers concentrated their efforts on the area previously excavated by Emir Chehab. They re-studied the remains and assessed their relevance for the reconstruction of the site’s stratigraphy. 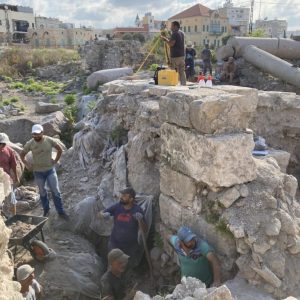 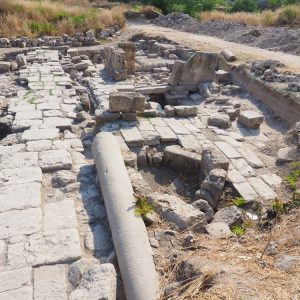 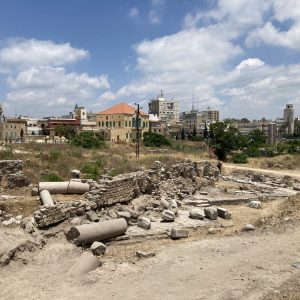 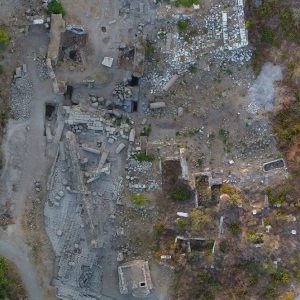 Investigations focused on a massive structure built in the Roman times, identified as a temple. It has two main phases: one dating to its construction in early-Roman times and the other to a major modification in the Late Roman period. The building displays a rectangular plan with an east-west orientation, a vestibule flanked by two columns (found lying nearby), and a podium on the other side of the cella. The building’s walls were originally covered by sandstone blocks and a subterranean chamber may have been located south of the entrance. The building stood on a platform made of massive limestone and sandstone blocks which supported the heavy burden of the facade and, in particular, of the eight-meter-high columns made of Egyptian pink granite.

A porticoed street with an east-west orientation led to the edifice’s stepped entrance, decorated with slabs engraved with geometrical motives. The street starts perpendicularly from a narrower one, where a shrine was identified this season. It was a structure consisting, as it now seems, of two rooms and a courtyard aligned on a north-south axis, one of them furnished with an Egyptian relief depicting Isis breastfeeding Horus as a child.

The temple and the urban area connected to it experienced extensive damages and changes in the early Byzantine times. The temple was dismantled and covered by a platform which supported a monumental basilica, destroyed, along with much of the city, by a tsunami in the 6th century AD. Later remains of the Fatimid, Crusader and Ottoman periods have also been recognized.

Online meeting with the UW Vice-Rector for Students and Quality of Teaching: Coverage
The enigma of Palaeozoic corals resolved
Tags: archaeology, cooperation, research

UW in ARWU 2021
17-08-2021
The results of the 2020 Academic Ranking of World Universities (ARWU) are out. This year, ShanghaiRanking Consultancy featured the best 1000 universities in the world. The University of Warsaw was ranked between 401 and 500.

Polish Centre of Mediterranean Archaeology, University of Warsaw coordinates Polish archaeological research in the Eastern Mediterranean since 1959 (since 1990 under the present name). In recent years it broadened its scope of interest into the Arabian Peninsula and the Caucasus. Currently about 25 projects are ongoing in Egypt, Sudan, Ethiopia, Cyprus, Lebanon, Kuwait, Oman, Armenia and Tunisia. The PCMA also runs Research Centres in Cairo and Sudan.