On bryozoans in “Scientific Reports”

Prof. Mikołaj Zapalski from the Faculty of Geology, with colleagues from Estonia, Germany and USA, investigated and described an interesting material of bryozoans from the latest Silurian (about 420 mln years ago) of Estonia. The findings indicate that the studied organisms, either in symbiosis, or alone, are able to form other mechanisms to adapt to the surroundings. The study results are published in “Scientific Reports”.

Bryozoans are marine organisms with a long evolutionary history – they were quite common as early as in the Ordovician (some 480 million years ago). They inhabit seafloor and form colonies of different shapes. The seafloor is restricted, therefore organisms that inhabit seafloor compete for space, which results in complicated interspecific relationships.

Bryozoans are filtrators, which means that they passively catch food particles by movement of the ciliated tentacles (lophophores). The currents close to the seafloor are always fainter than higher in the water column – as a result, the bottom currents carry less food particles. Corals and hydrozoans are, on the other hand, micropredators, and they actively catch small planctic organisms by paralyzing them with stinging cells.

The researchers from Poland, Estonia, Germany and USA investigated the material from the current Estonian territory. The material reveals the bryozoan colonies intergrown with coral and hydrozoan colonies. Both those bryozoans and species that did interact with them, separately form flat and encrusting colonies covering seafloor.

As the researchers have shown, their symbiosis, however, caused formation of branching colonies. The branching colonies penetrated water column, as a consequence increasing food availability for both involved organisms.

Similar symbioses were known from younger strata, but the Polish-Estonian-German-American research shows that such ecological strategies are older than it was previously thought.

The first “dormant” black hole outside our Galaxy
19-07-2022
An international group of astronomers with the participation of scientists from the Astronomical Observatory of the University of Warsaw discovered a “dormant” stellar-mass black hole in the Large Magellanic Cloud, a neighbor galaxy to our own. It is the first object of this type found outside the Milky Way. 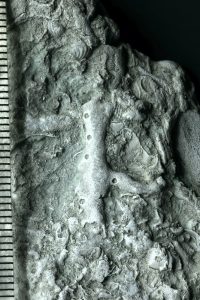 A Silurian bryozoan from Estonia. The branch itself is a bryozoan colony (small openings are zoecia, the places where individuals lived), and regularly distributed larger openings are remains of a hydrozoan colony. Photo: M. Zapalski 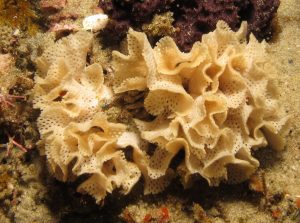