The first “dormant” black hole outside our Galaxy

An international group of astronomers with the participation of scientists from the Astronomical Observatory of the University of Warsaw discovered a “dormant” stellar-mass black hole in the Large Magellanic Cloud, a neighbor galaxy to our own. It is the first object of this type found outside the Milky Way. The discovery was made thanks to six years of spectroscopic observations obtained with the European Southern Observatory’s (ESO’s) Very Large Telescope (VLT) and nearly 20 years of photometric observations carried out as part of the Polish OGLE project with the Warsaw Telescope in Chile.

Stellar black holes form by the gravitational collapse of the most massive stars. We expect that the Local Group galaxies contain billions of black holes, though few have been observed so far. Most of the stellar-mass black holes discovered so far are in stellar binary systems, where the mass transfer between the components causes intense X-ray radiation. In contrast, so-called “dormant” black holes occur in binary systems with no intense mass transfer between the companions and therefore such objects do not emit high levels of X-ray radiation. Astronomers expect that the vast majority of black holes in the Universe are “dormant”, although they are particularly hard to detect since they do not interact much with their surroundings.

The newly found black hole is located in the Tarantula Nebula, an extensive star-forming region in the Large Magellanic Cloud. A group of astronomers led by Dr. Tomer Shenar from Amsterdam University has studied nearly 1,000 stars in the Tarantula Nebula region looking for binary systems containing black holes as companions. One of the systems discovered in this way – VFTS 243 – consists of a hot, blue star weighing 25 times the Sun’s mass and an invisible companion with a mass at least 9 times the mass of the Sun. The researchers tested various hypotheses about the nature of this dark component of the system and concluded that it could only be a “dormant” black hole.

The long-term observations of the VFTS 243 conducted by astronomers from the OGLE team using the Warsaw Telescope at Las Campanas Observatory in Chile were essential for proving this hypothesis. The OGLE data showed that the brightness of the system minimally changes during the orbital period due to the gravitational distortion of the main component by the black hole, which is in perfect agreement with the model’s predictions.

The observed properties of the VFTS 243 allow drawing conclusions about the past and future of this binary system. The absence of the explosion debris and the nearly circular orbit of the system indicate that the black hole was formed by the complete collapse of a massive star without a spectacular supernova explosion. This supports the hypothesis that the most massive stars may end their lives by vanishing, i.e. completely collapsing into black holes. In the future, the primary component of the system will also turn into a black hole, thus creating a system of two black holes slowly tightening their orbit due to the emission of gravitational waves. However, the merge of the components will take place after an enormous amount of time, of tens to a few hundred billion years from now. 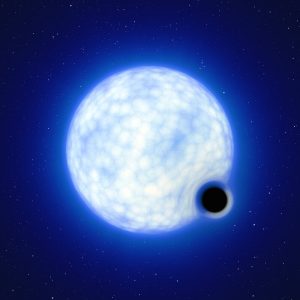 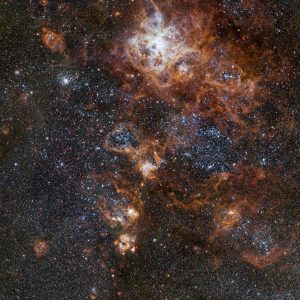 Results of the study are presented in the paper:

“An X-ray quiet black hole born with a negligible kick in a massive binary of the Large Magellanic Cloud”,