The Polish Centre of Mediterranean Archaeology of the University of Warsaw will set up a research centre in Paphos, Cyprus, where the Polish Centre of Mediterranean Archaeology, University of Warsaw expeditions have been working for over half a century. It will be the third foreign research post of the centre.

The first Polish archaeologists appeared in Cyprus over half a century ago, with the doyen of Polish Mediterranean archaeology, Prof. Kazimierz Michałowski. Since 1965, a PCMA UW expedition has been working in Nea Paphos, one of the ancient capitals of the island. Its discoveries, including wonderful works of mosaic art and sculpture, contributed to the site’s enrollment to the UNESCO World Heritage List. These discoveries not only added to the knowledge of ancient culture, art and history of Cyprus and the entire Mediterranean world, but also contributed to the development of the city, becoming one of the biggest tourist attractions of Cyprus.

The PCMA UW expedition has been operating in Paphos for over 55 years and is the longest-running foreign archaeological research project in Cyprus. For over a decade, an expedition of the Jagiellonian University in Krakow has also been working in Nea Paphos, conducting research on the Agora, in the central part of the city. Recently, both expeditions have been combined into a joint project of the University of Warsaw, Jagiellonian University, and Warsaw University of Technology. There are also individual grant projects by several Polish researchers.

“The history of Polish research in Cyprus is very long and fruitful. After talks with the Cypriot side, we came to the conclusion that prospects for the future are equally far-reaching,” explains Assist. Prof. Artur Obłuski, Director of the PCMA UW. “Therefore, it is worth institutionalizing this cooperation by setting up a permanent Research Centre in Paphos. Its presence and support will make the work of researchers visiting Cyprus easier and more efficient, just as is the case with the PCMA UW Research Centre in Cairo. Thanks to the new Research Centre, it will also be easier to create and implement joint Cypriot–Polish projects,” says Obłuski.

The Research Centre will have at its disposal premises which will be made available to Polish researchers, and its tasks will include:

Tyre: Discovery of a new Roman Temple in the Phoenician port in Lebanon
01-10-2021
Tyre, the Phoenician capital on the coast of Lebanon, is the site of the latest project with PCMA UW involvement. The international team researching this UNESCO World Heritage List city has recently finished a highly successful fieldwork season discovering the remains of a complex belonging to a Roman-period temple. 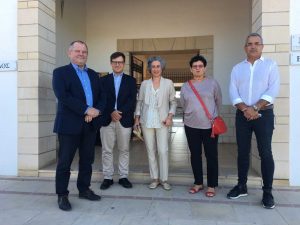 Establishment of PCMA UW Research Centre in Cyprus. In the photo (from the left): Prof. Alojzy Z. Nowak, Rector of the University of Warsaw; Prof. Artur Obłuski, Director of the Polish Centre of Mediterranean Archaeology; Prof. Ewdoksia Papuci-Władyka, Head of the joint archaeological expedition in Nea Paphos; the representatives of Cyprus: Dr. Marina Solomidou-Ieronymidou, Director of the Department of Antiquities, Cyprus, and Dr. Efstathios Raptou, archaeologist. Credits: H. Chudzio.

Centre forMediterranean Archaeology of the University of Warsaw

– for over 60 years under its auspices Polish excavation and conservation works have been conducted in the countries of the Mediterranean Sea, Africa and the Middle East. Currently CAŚ UW is involved in approximately 25 projects at sites dating from prehistoric times through all historical periods to late antiquity and the Islamic period in Egypt, Sudan, Ethiopia, Tunisia, Lebanon, Cyprus, Kuwait, Oman and Armenia. PCMA UW also runs Research Stations in Cairo an Sudan.