On 2nd September, the Egyptian delegation met with the representatives of the University of Warsaw, Ministry of Foreign Affairs, Ministry of Science and Higher Education, and the Polish archaeological community working in Egypt. The involvement of Polish researchers in the studies on Egyptian archaeology and history was the main topic of the meeting.

It was the involvement of Polish researchers in the studies on the archaeology and history of Egypt that was the main reason and topic of this meeting. Among the attendees were the directors of more than 10 archaeological expeditions working in Egypt. These expeditions, conducted with the participation of scientists from various institutions, either operate under the auspices of the PCMA UW or benefit from the assistance and facilities of the PCMA Research Centre in Cairo.

In his address, Minister El-Enany defined the role of foreign archaeological institutes in Egypt, such as the PCMA Research Centre in Cairo. As the Minister in charge of both tourism and archaeology, he reiterated the importance of research into Egypt’s antiquity for the development of tourism. He emphasized the importance of cooperation between archaeological institutes and the Ministry, which should aim at educating local professionals and preparing joint research and development strategies.

As declared by Dr. Artur Obłuski, the director of the PCMA UW, this is a vision that is in line with the plans of the PCMA UW for profiling the activities of its archaeological expeditions. In the following years, an even greater emphasis will be placed on the conservation of finds and heritage management to make it more easily accessible for visitors. The PCMA UW, together with other Polish institutions, will be actively involved in capacity building in terms of the management of archaeological heritage.

The meeting coincided with the celebrations of the 100th anniversary of archaeology at the University of Warsaw marked by the opening of the exhibition “Magna Scientia Antiquitatis” devoted to the history of UW’ archaeological research. A prominent place among the achievements highlighted by the exhibition is occupied by the results of the work carried out in Egypt. 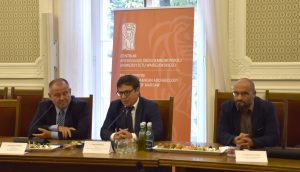 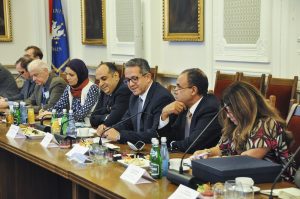