On 1st September rector’s team and authorities of the university’s faculties, institutes and other units began new term.

From the beginning of September Prof. Marcin Pałys, the UW Rector, officially started his second term in office. He was elected by the Electoral College on 20th April.

Not only the UW Rector was reelected, but also Vice-Rector Prof. Anna Giza-Poleszczuk. Other members of the rector’s team will be debuting in new roles. The elections of the vice-rectors were held in May.

In the springtime also deans, vice-deans and heads of office were elected. The Senate of the University of Warsaw – the University’s most important governing body also changed its members. First meeting will be held on 28th September.

Rector and the vice-rectors of the University of Warsaw. 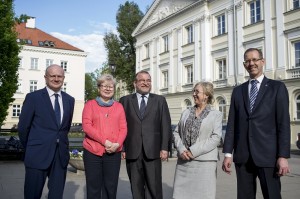