Main siteNewsThe war in Ukraine in the opinion of Poles – report

The war in Ukraine in the opinion of Poles – report

Poles are anxious about their future cause of the war in Ukraine. Yet, they unequivocally agree that refuges have been well received in Polish local communities, small homelands. The Laboratory of Media Studies has released results of the survey “The War in Ukraine in the Opinion of Poles”.

The CATI survey was carried out in May and June by the team of the Laboratory of Media Studies of the University of Warsaw. 1,609 respondents answered the questions about selected aspects of the war in Ukraine, i.e. fears for future, refugees in Polish local communities, Polish media interest in the military conflict as well as the Russia’s preparedness for the invasion.

“The survey is an interesting illustration of the opinions of Polish women and men on how the Russian-Ukrainian war looks as seen through the windows of their homes and the screens of their smartphones,” Dr Karolina Brylska, a vice-director of the UW Laboratory of Media Studies, said.

“After two years of fighting a pandemic, during a period of great uncertainty, it seems that the war in Ukraine might be seen as the straw that broke the camel’s back; in the coming months this may cause many breakthroughs and re-evaluations, in social, economic, and political life,” Prof. Tomasz Gackowski of the UW Faculty of Journalism, Information and Book Studies, a director of the UW Laboratory of Media Studies, stated.

According to the report 70% of respondents declared that the war in Ukraine made them worry about their future. Women and older respondents were significantly more likely to share such concerns, regardless of the level of their education.

“The military conflict in the vicinity of our borders influenced the feeling of safety in Poles. We perceive that the apparently safe world has just collapsed,” Dr Karolina Brylska of the UW Faculty of Journalism, Information and Book Studies, a co-author of the project, said.

As the report says, “Poles rose to the occasion and stood on the right side of history, fully opening their hearts and homes to Ukrainian women and children fleeing the war”. Poles unequivocally (99%) agree that refugees have been well received in their local community. The analysis indicates that explicit anti-Ukrainian attitudes should be considered marginal.

31% of the survey respondents agree that there is too much coverage of the Russian-Ukrainian conflict in the Polish media whereas the majority of respondents (54%) disagree with this statement. The analysis shows the vivid interest in the war in Ukraine. However, there is a group that declares some sort of ‘fatigue’ with the overwhelming topic of the war.

“The internet is full of images, videos and texts describing the heroic actions and battles of the Ukrainians against the Russians, who have repeatedly dealt and are dealing severe blows to the supposedly invincible army of the Russian Federation. More than 60% of Poles disagree with the statement that Russia was well prepared for war. We can see with our own eyes that the myth of a powerful and effective Russia is being dispelled,” Prof. Tomasz Gackowski of the UW Faculty of Journalism, Information and Book Studies, a director of the UW Laboratory of Media Studies, said. The analysed document indicates that 63% of respondents believe that the Russian Federation was not well prepared, politically, economically and socially, for the military invasion. Only 17% of Poles agree with the statement that Russia was well prepared for war.

The Laboratory of Media Studies of the University of Warsaw, The War in Ukraine in the Opinion of Poles. LBM UW CATI Survey. Warsaw, August 2022.

UW in ARWU 2022
16-08-2022
The results of the 2022 Academic Ranking of World Universities (ARWU) are out. This year, ShanghaiRanking Consultancy features the best 1,000 universities in the world. The University of Warsaw is ranked between 401 and 500. 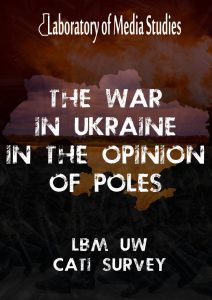 The Laboratory of Media Studies of the University of Warsaw, The War in Ukraine in the Opinion of Poles. LBM UW CATI Survey. Warsaw, August 2022.