After years of research conducted by Prof. Marek T. Olszewski from the UW Faculty of Archaeology, the iconographic program of the famous mosaic from the reception room of the Roman House of Aion in Paphos (Cyprus) has been resolved. The interpretation of the Polish researcher was accepted by scholars of Roman iconography as adequate and precise.

A Polish archaeological mission conducted by Prof. W. A. Daszewski in 1983, unearthed a room (68 m2) with an enigmatic figural mosaic (16 m2) in ancient Paphos. The overall decoration of the floor indicated that this room should be considered as dining room (triclinium), where the meal could be a pretext for discussion of multiple topics among the hosts. This hall which is found in an independent part of the house, was hired most likely by a group of people such as an association using it regularly; the hosts entered through an independent entrance directly from the street. The figural mosaics consisted of five rectangular panels in 2-1-2 order. All panels were decorated with mythological scenes as follows:

The program of the mosaic has been differently interpreted by specialists, disregarding the overall narrative and the meaning of five panels, its purpose and to whom it was created. The mosaics are quite accurately dated to after AD 318, based on a coin found in the mortar. In this period the Roman power and administration rejected the pagan religion and converted to Christianity. It was a period of numerous confrontations and polemics between conservative adherents of Roman religions and the new monotheistic worshipers. 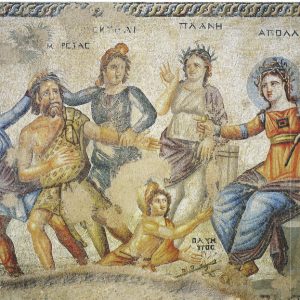 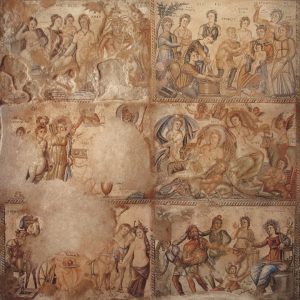 According to Prof. Olszewski, four stages are distinguished:

The mosaic of the House of Aion in Paphos is not the only case showing polemical attitude towards the followers of the new religion. Two other such polemical mosaics can be seen in the nearby Syria – Philipopolis (a cosmological mosaic) and another in Apamea (Socrates among the sages).

Other publications of Prof. Marek T. Olszewski on the mosaic from Paphos can be found on the Academia.edu website >>

‘The iconographic programme of the Cyprus mosaic from the House of Aion reinterpreted as an anti-Christian polemic’, (in:) Et in Arcadia Ego. Studia memoriae professoris Thomae Mikocki dicata, ed. by W. Dobrowolski, Warsaw 2013, pp. 207-239.

Virtual Nubia: Digital reconstructions of medieval monasteries in Sudan
15-09-2020
How did medieval monasteries in Nubia look? Now it is possible to find it out. Archaeologists from the Polish Centre of Mediterranean Archaeology of the University of Warsaw have digitally reconstructed buildings that can now be visited without leaving home.
Counting on fingers – or beyond known oxidation states of chemical elements
15-09-2020
Oxidation state usually takes the values from –4 up to +8, and even +9 in one case. Scientists from Centre of New Technologies have done advanced quatum-mechanical calculations and on this ground, they propose several simple molecules, where oxidation state is +9, and even could reach the value of +10.
Visit of the Minister of Tourism and Antiquities of the Arab Republic of Egypt to UW
04-09-2020
On 2nd September, the Egyptian delegation met with the representatives of the University of Warsaw, Ministry of Foreign Affairs, Ministry of Science and Higher Education, and the Polish archaeological community working in Egypt. The involvement of Polish researchers in the studies on Egyptian archaeology and history was the main topic of the meeting.