Main siteNewsProf. Jacek Klinowski with the title of Doctor Honoris Causa of the University of Warsaw

Prof. Jacek Klinowski with the title of Doctor Honoris Causa of the University of Warsaw

The ceremony of awarding the honorary title took place on 8th December in the Senate Hall of Kazimierzowski Palace. As Prof. Klinowski expressed in his speech, “the conferred title of Doctor Honoris Causa is a great honour. As, in 2005, sir Roger Penrose was the last person the University of Warsaw granted this prestigious title, I would like to emphasise how difficult it would be for me to place my humble person among such eminent scientists.”

Prof. Jacek Klinowski is a world famous authority in solid-state nuclear magnetic resonance spectroscopy. “Worldwide known and respected not only for his magnificent achievements in pioneering research into zeolite chemistry but also for his commitment to the promotion of the Polish culture and research work,” as described by Prof. Krzysztof Woźniak, the Faculty of Chemistry, University of Warsaw, and added “Prof. Klinowski has become the best Polish ambassador in the University of Cambridge. Throughout many years of his work at the Faculty of Chemistry, University of Cambridge, he has been occupying the leading position among the most distinguished and recognizable scientists. Well-known and highly-appreciated for his excellent lectures, scientific breakthrough work and interdisciplinary discoveries. Undoubtedly, Prof. Klinowski represents all the qualities of an excellent Polish scientist and researcher.” 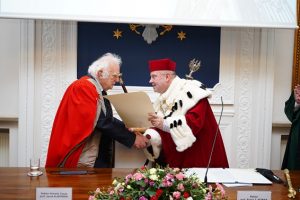 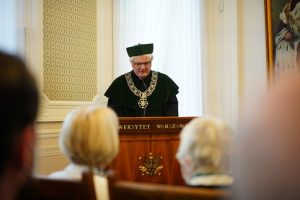 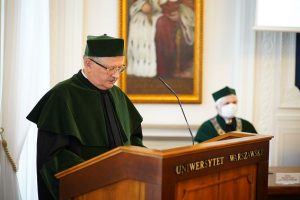 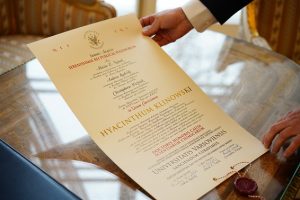 The UW Senate granted the prestigious title of Doctor Honoris Causa at the request of the Faculty of Chemistry, University of Warsaw, on 24th June 2020. The professional achievements of the candidate were reviewed by: Prof. Jerzy Datka from the Jagiellonian University, Prof. Marek Potrzebowski from the Centre of Molecular and Macromolecular Studies of the Polish Academy of Sciences, and Prof. Maria Ziółek from the Adam Mickiewicz University in Poznań.

“Among a large number of passionate scientists and dedicated researchers, there are few to be perceived outstanding creators of new ideas. Prof. Klinowski is one of the elite scientists as a man of numerous gifts, remarkable diligence and intuition,” reviewed  Prof. Potrzebowski.

The Climate Change and Sustainable Development Agenda
06-12-2021
Facing the climate change and its consequent challenges, the UW Rector’s Team for Ecology and Climate Crisis has issued a document that describes strategic ”milestones” to be achieved by the University of Warsaw in the forthcoming years. The Agenda refers to the Sustainable Development Goals adopted by the United Nations.