The Kuwaiti-Polish Archaeological Mission headed by Prof. Piotr Bieliński from the Polish Centre of Mediterranean Archaeology of UW discovered at the Bahra 1 site in Kuwait a structure that may be interpreted as a cultic building from the 6th millennium BC.

The prehistoric settlement of Bahra 1 is the largest of uncovered sites associated with the Ubaid culture, known so far from the Arabian Peninsula. The Ubaid culture, which first developed in Mesopotamia had a truly global sphere of interaction – objects characteristic for this culture, such as painted pottery, have been found at a large territory stretching from Palestine to the coast of the UAE. This led to the creation of first cities in the following period. But the most important development of the Ubaid culture – a new, more complex type of social structure – is less visible in the archaeological record. 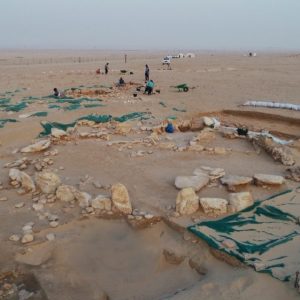 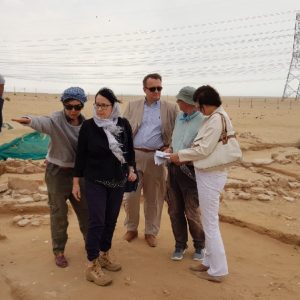 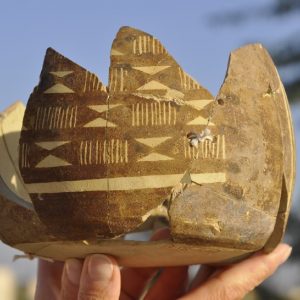 This year, the Kuwaiti-Polish Archaeological Mission from the UW Polish Centre of Mediterranean Archaeology in co-operation with Dr Sultan al-Duweish, the Director of the Department of Museums and Archaeology, and Dr Hamid al-Mutairi, Head of Excavations and Surveying Sector, discovered at the Bahra 1 site a structure that may beinterpreted as a cultic building. The discoveries show that this settlement from the 6th millennium BC was more developed than any other site from this period known from the Gulf region.

Excavations at Bahra 1 uncovered at least 10 structures in an area stretching for c. 180 m. They yielded over 16 thousand fragments of pottery fragments, most of which came from Mesopotamian Ubaid-type vessels. Now archaeologists have encountered another trace of the culture’s influence – this time in the form of a building that has a different ground plan than any other structure excavated so far at Bahra1.

“There are indications that this may be a building that had a cultic function,” says Prof. Bieliński. “It combines elements characteristic for the local tradition with those of the Ubaid culture”.

If further research confirms these observations, this will be the oldest building of such function not just in Kuwait but in the whole Gulf region.