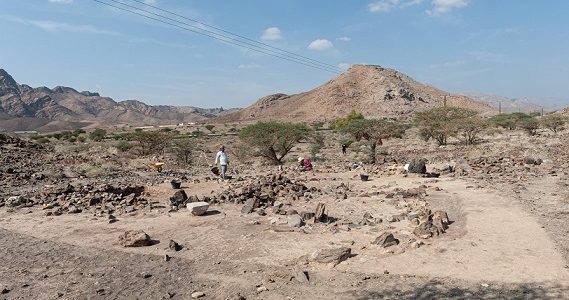 At the end of December, another season of archaeological fieldwork in Qumayrah Valley in Northern Oman came to a close. Archaeologists identified there another tower in a Bronze Age settlement, unearthed evidence of copper smelting and discovered a 4 thousand-year-old game board.

In the current season, settlements of the Bronze Age and Iron Age II situated near the village of Ayn Bani Saidah were the main focus of the team’s work.  “Ayn Bani Saidah is strategically located at a junction of routes connecting Bat in the south, Buraimi and Al-Ayn in the north, and the sea coast near Sohar in the east. Along this route there are some major sites from the Umm an-Nar period. So we hoped that also our site will be in the same league,” explained Prof. Piotr Bieliński, the project director from the Polish Centre of Mediterranean Archaeology, University of Warsaw (PCMA UW).

Latest discoveries prove the archaeologists right. “The settlement from the Umm an-Nar phase is exceptional for including at least four towers: three round ones and an angular one. One of the round towers had not been visible on the surface despite its large size of up to 20 meters in diameter. It was only discovered during excavations,” said Dr Agnieszka Pieńkowska from the PCMA UW, who is analysing the Bronze Age remains within the project.

New discoveries have also been made in other Bronze Age buildings. “We finally found proof of copper working at the site, as well as some copper objects. This shows that our settlement participated in the lucrative copper trade for which Oman was famous at that time, with mentions of Omani copper present in the cuneiform texts from Mesopotamia,” said the project director.

However, the most unexpected discovery is not related directly to economy or subsistence. “In one of the rooms we’ve found a game-board” smiled Prof. Bieliński. The board is made of stone and has marked fields and cup-holes. Games based on similar principles were played during the Bronze Age in many economic and cultural centres of that age. “Such finds are rare, but several examples are known from India, Mesopotamia and even the Eastern Mediterranean basin. The most famous example of a game-board based on a similar principle is the one from the graves from Ur,” the archaeologist explained. 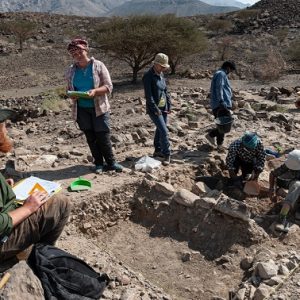 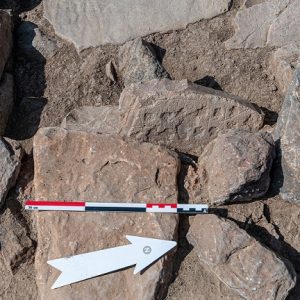 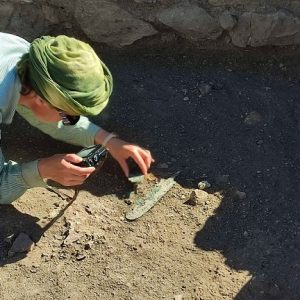 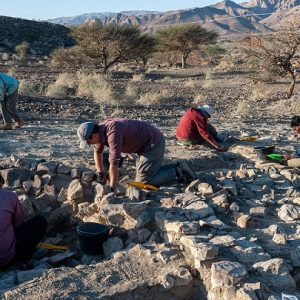 The abundance of settlement traces

The research area, the Qumayrah micro-region, is a mountain valley stretching from Bilt in the north-east to Ayn Bani Saidah in the south-west. The region seems to have been much more meaningful than it has been recently suspected and can still reveal a number of surprising archaeological discoveries. During initial investigations, conducted since 2015, the valley proved to be very rich in archaeological remains from at least five different archaeological periods. Archaeologists discovered that a human settlement was present there since the late Neolithic period, about 4300-4000 BCE. And both in Ayn Bani Saidah and in Bilt, tombs and settlements from the Umm an-Nar period can be admired. Furthermore, the remains of an Iron Age II settlement, c. 1100-600 BCE, sprawling around the stony hills near Ayn Bani Saidah have been found to be several times larger than initially thought. Archaeologists also documented the ruins of a Late Islamic-period village standing on top of earlier remains. “This abundance of settlement traces proves that this valley was an important spot in Oman’s prehistory” said Prof. Bieliński.

Next year, the team will continue work in the Qumayrah Valley, both in Ayn Bani Saidah and in Bilt, on the other end of the valley where further Umm an-Nar remains are located.

The work is conducted under the Omani-Polish project “The development of settlement in the mountains of northern Oman in the Bronze and Iron Ages” headed jointly by Prof. Piotr Bieliński (PCMA UW) and Dr Sultan al-Bakri, Director General of Antiquities at the Ministry of Heritage and Tourism of the Sultanate of Oman. The project investigates the development and forms of settlement in one of the least studied corners of Oman: the mountain valleys of the Northern Hajar range.

European education in 4EU+. How to get involved?
Introduction to the USOSweb – online training for international UW employees
Tags: archaeology, Polish Centre of Mediterranean Archaeology, research

Archaeological research in Soba
29-12-2021
Fieldwork in Soba, the former capital of the Kingdom of Alwa – today, a suburb of Khartoum – was paused for a mid-season break in mid-December. It was carried out by a team of specialists led by Dr Mariusz Drzewiecki from the Polish Centre of Mediterranean Archaeology, University of Warsaw. The excavations revealed the remains of a medieval garden. It is the first this kind of a discovery in Soba.

Prof. Piotr Bieliński is an archaeologist specialising in the ancient Middle East. His research interests include the art and architecture of Mesopotamia, Syro-Palestine, and the Arabian Peninsula from the Chalcolithic period to the Iron Age. Since the 1980s, he has directed over a dozen Polish archaeological expeditions to the Middle East: in Iraq, Syria, Kuwait, the UAE, and Oman. Prof. Bieliński was the dean of the Faculty of History at the University of Warsaw (1999-2005) and the director of the Polish Centre of Mediterranean Archaeology of the University of Warsaw (2005-2013). Since 2014 he has been the President of the Research Council of the PCMA UW.

Polish Centre of Mediterranean Archaeology, University of Warsaw coordinates Polish archaeological research in the Eastern Mediterranean since 1959 (since 1990 under the present name). In recent years it has broadened its scope of interest into the Arabian Peninsula and the Caucasus. Currently about 20 projects are ongoing in Egypt, Sudan, Cyprus, Lebanon, Kuwait, Oman, Armenia and Tunisia. The PCMA UW also runs Research Centres in Egypt, Sudan and Cyprus.