Lecture of Secretary General of NATO

– It is important that we keep the debate going on on how we can develop, how we can strengthen NATO – said Jens Stoltenberg, the Secretary General of NATO. – It’s very natural to do that at this university – continued.

The lecture delivered by Jens Stoltenberg took place on 31st May in the University Library. The General Secretary of NATO was speaking about security challenges which will be discussed during the NATO summit in July.

– It shouldn’t be strange that the Secretary General Mr. Jens Soltenberg will be giving this lecture here at the University of Warsaw – said Prof. Marcin Pałys, Rector of the UW. – It will not be new to say that in today’s world we face new unknown challenges, problems and threats. They often have global character. – Universities, scientific centres and think thanks have important role. Solutions to big challenges- terrorism, migration can be facilitated by systematic and firm analyses of their origins. Social sciences, economics, cultural studies can help to comprehend the process that impacts our life – stressed Prof. Pałys. In times of radicalization of social groups, societies and nations, universities ought to be centres of tolerance, open attitudes for understanding of different cultures, traditions and value systems – added.

Relations with Russia, situation in the Middle East and North Africa, migration crisis, terrorism and cyberterrorism as well as nuclear threats were only some topics touched by Jens Stoltenberg during the lecture „The Warsaw Summit: Strengthening NATO in turbulent times”.

– Defending our homelands is not just about defending our borders. It is also about projecting stability beyond our borders. Because if our neighbours are more stable, we are more secure. That will be the other major theme for the Warsaw Summit – said the Secretary General of NATO.

Full text delivered by Jens Stolberg is available on the NATO’s website. 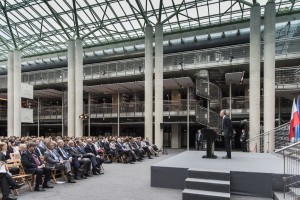 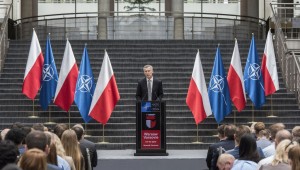 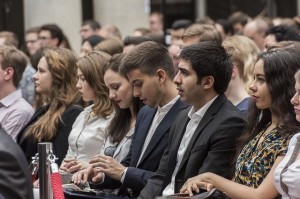