Inauguration of the new academic year

On 30th September in the Auditorium Maximum Prof. Marcin Pałys, Rector of the University of Warsaw began the new academic year.

– In this year our university celebrates its great jubilee. I can not begin this speech differently than from recalling about that event and our predecessors – said Rector Marcin Pałys. Next he mentioned rectors who were managing the UW in the first and second centuries.

Rector of the University of Warsaw focused on the future of the UW rather than all academic achievements up to now. He spoke about the new multiannual development plan. – Polish state authorities were convinced by the idea of the development of the University and decided to found it. On 3rd November 2015 the government adopted a special resolution supporting the UW. Until 2025 the University will receive PLN 945 m (about EUR 230 m). We called this programme “Good investment” because it will bring profits to the whole country – added Rector Pałys.

The aim of the UW is to maintain strong position among best universities in Europe and strengthen the research recognition. Realization of the multiannual development plan will enable to conduct interdisciplinary research important for society concerning for instance globalization and digitalization effects or reasons of economic and social crises. – Aristotle claimed that excellence is never an accident. It is always the result of high intention, sincere effort, and intelligent execution. Excellence in science must be our academic everyday occurrence. We have solid bases and we can build upon them. All employees and all our faculties must endeavor to achieve the excellence – said Rector.

Rector Pałys, who began his second term in office, was speaking also about plans for the next four years, among others, internal academic grants for research, scholarship programme for candidates from abroad or post-doctoral studies dedicated to outstanding scholars from Poland and other countries.

The solemn ceremony of the inauguration of the new academic year was attended by Jarosław Gowin, Minister of Science and Higher Education in Poland.

Doctor Paweł Rutkowski from the Section for Sign Linguistics of the UW Faculty of Polish Studies delivered the inauguration lecture about deaf people in Poland who, in Dr. Rutkowski’s opinion, should be recognized as a language minority. 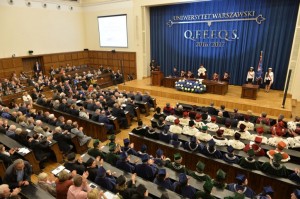 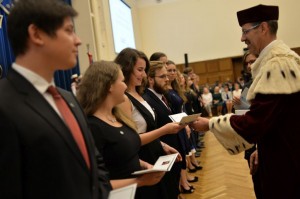 Best students of first, second and third cycle stadies matriculated at the University of Warsaw. 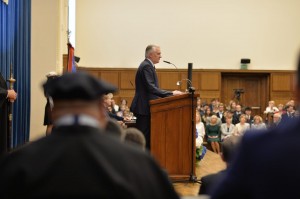 The Minister of Science and Higher Education in Poland – Jarosław Gowin participated in the ceremony. 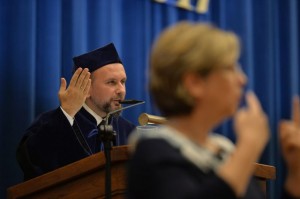