Professor Maciej Lewenstein – one of the top theoretical physicist in his generation received a honoris causa degree of the University of Warsaw.

– It is an honor for me to be awarded by my Alma Mater – Prof. Maciej Lewenstein said during the ceremony. Physicist graduated studies at the Faculty of Physics of the University of Warsaw in 1978. Next, he has been working, among others, in Essen, Harvard and Hanover. Since 2005, Prof. is an employee of the Catalan Institution for Research and Advanced Studies. In his speech he stressed also that UW scientists like Prof. Iwo Białynicki-Birula and Prof. Kazimierz Rzążewski had a great influence on his personality, research and further scientific career.

– I consider Prof. Maciej Lewenstein to be among the top theoretical physicist in his generation, who with his work shaped and defined theoretical quantum optics and atomic physics as we know it today – Prof. Peter Zoller from the Leopold Franzens University of Innsbruck wrote in the review of scientific achievements of Prof. Lewenstein.

Recognised scholar received two European Research Council grants. He cooperated with Prof. Roy Glauber – laureate of the 2005 Nobel Prize in Physics. He is a coauthor of over 500 scientific articles that were quoted approximately 23 thousand times. 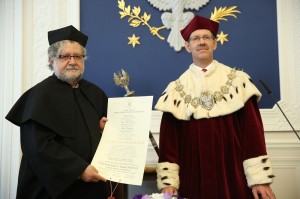