Main siteNewsDr. Thurston C. Hicks as a co-author of the paper in “International Journal of Primatology”

Dr. Thurston C. Hicks as a co-author of the paper in “International Journal of Primatology”

The article entitled “The Relationship Between Tool Use and Prey Availability in Chimpanzees (Pan troglodytes schweinfurthii) of Northern Democratic Republic of Congo” has been published in “International Journal of Primatology” magazine. Its first author is Dr. Thurston C. Hicks from the UW Faculty of “Artes Liberales”.

“Cultural override” is a phenomenon typical of humans in which we seek out resources based on cultural preference regardless of availability. Sometimes this can be a constraint on behavior, when readily-available resources are ignored in favor of those more difficult to come by. Can such a phenomenon be found in one of our closest relatives, the chimpanzee? A research team led by Dr. Thurston C. Hicks from the UW Faculty of “Artes Liberales” and the Max Planck Institute for Evolutionary Anthropology (Leipzig, Germany) searched the forests of DR Congo for an answer.

The research subjects were different subpopulations of the Eastern chimpanzees (Pan troglodytes schweinfurthii) occupying two habitats: moist tropical lowland forest and moist tropical forest-savanna mosaic on two sides of a major river, the Uele. Given differences in encounter rates of different kinds of tool sites on both sides of the Uele River, the researchers predicted that these subpopulations would differ in their likelihood of using tools to prey on two insect species despite similar availability.

In surveys conducted over a 9-year period at 19 different survey regions in northern Democratic Republic of Congo the researchers collected and analyzed data on chimpanzee tool-assisted exploitation of insects. To determine the availability of insect species eaten by the chimpanzees, they counted insects and their mounds on transects and recces at 12 of these sites. The observations included epigaeic Dorylus and Ponerinae ants, both preyed upon by the chimpanzees. The scientists found little difference in the availability of these insects across the region. Despite this, tool encounter rates for epigaeic Dorylus, but not Ponerinae, ants were significantly higher in the mosaic to the north of the Uele. Furthermore, the researchers found no evidence for termite fishing anywhere, despite the availability of Macrotermes mounds throughout the region and the fact that chimpanzees at a number of other study sites use tools to harvest these termites. Instead, the chimpanzees of this region used a novel percussive technique to harvest two other types of termites, Cubitermes sp. and Thoracotermes macrothorax. 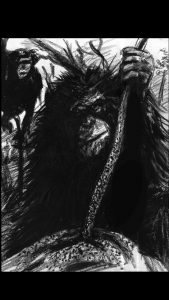 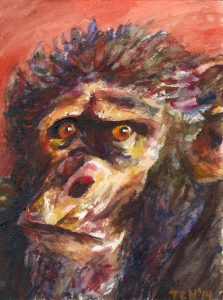 The observed mismatch between prey availability and the specifics of predation is consistent with “cultural override”. Caution, however, is needed: given the different habitats studied, the impact of ecological factors cannot be excluded in this case.

These and other similar studies on other chimpanzee populations promise to contribute to a better understanding of the evolution the human dependency upon culture.

The article entitled “The Relationship Between Tool Use and Prey Availability in Chimpanzees (Pan troglodytes schweinfurthii) of Northern Democratic Republic of Congo” was published in the “International Journal of Primatology”:

Meat-eating habits of the chimpanzees of DR Congo: the latest research from Dr. Thurston C. Hicks of the UW Faculty of “Artes Liberales”
24-09-2019
In 1989, deep inside the Ituri Forest, Dr John Hart and radio tracker Nobirabo encountered 2 adult male chimpanzees crouched over the carcass of a radio-collared okapi which had just been killed by a leopard. What happened next is described in a chapter of the new book “Chimpanzee Behaviour: Recent Understandings from Captivity and the Forest”.
Copernicus Award for Prof. Stefan Dziembowski
21-04-2020
Prof. Dr. Sebastian Faust, Technical University of Darmstadt, and Prof. Dr. Stefan Dziembowski, University of Warsaw, have been chosen to receive the 2020 Copernicus Award from the German Research Foundation and the Foundation for Polish Science for their services to German-Polish research collaboration. The jury appointed jointly by the DFG and the FNP selected the two researchers for their outst