The scientist was awarded by Polish Minister of Foreign Affairs. The Bene Merito distinction was established by the Council of Ministers of the Republic of Poland in November 2009. It is awarded to Polish and foreign citizens honoring their role in strengthening Poland’s position on the international scene.

Dr Zbigniew Szafrański headed the Research Center in Cairo for 10 years. He participated in the excavations carried out by the Centre’s missions in Alexandria, Saqqara and Western Thebes, cooperating also with the Austrian archaeological expedition to Tel el-Dab’a/Awaris. Since 1999 Dr Szafrański has been in charge of the Polish Egyptian Archaeological and Conservation Mission to the Temple of Hatshepsut in Deir el-Bahari. He has represented the Polish Centre of Mediterranean Archaeology at many international meetings and conferences and participates actively in Cairo’s scientific life.

Polish Ambasador in Cairo Michał Murkociński decorated Dr. Szafrański during a ceremony held on 19 October 2015 at the seat of the Research Center in Cairo

The ceremony of decorating with the Bene Merito destinction at the Research Center in Cairo. 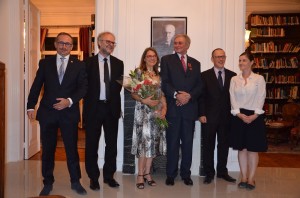