An Earth-sized rogue planet discovered in the Milky Way

Our Galaxy may be teeming with rogue planets, gravitationally unbound to any star. An international team of scientists, led by Polish astronomers from the University of Warsaw, has announced the discovery of the smallest Earth-sized free-floating planet found to date.

Over four thousand extrasolar planets have been discovered to date. Although many of the known exoplanets do not resemble those in our solar system, they have one thing in common – they all orbit a star. However, theories of planet formation and evolution predict the existence of free-floating (rogue) planets, gravitationally unattached to any star. Indeed, a few years ago Polish astronomers from the OGLE team from the Astronomical Observatory of the University of Warsaw provided the first evidence for the existence of such planets in the Milky Way. Writing in “Astrophysical Journal Letters”, OGLE astronomers announced the discovery of the smallest rogue planet found to date.

Exoplanets can be only rarely directly observed. Usually, astronomers find planets using observations of the light from the planet’s host star. For example, if a planet crosses in front of its parent star’s disk, then the observed brightness of the star periodically drops by a small amount causing so called transits. Astronomers can also measure the motion of the star caused by the planet.

The gravity of a free-floating planet may deflect and focus light from a distant star when passing closely in front of it. Due to the distorted image the star temporarily seems much brighter. Credit: Jan Skowron / Astronomical Observatory, University of Warsaw.

Free-floating planets emit virtually no radiation and – by definition – they do not orbit any host star, so they cannot be discovered using traditional methods of astrophysical detection. Nevertheless, rogue planets can be spotted using an astronomical phenomenon called gravitational microlensing. Microlensing results from Einstein’s theory of general relativity – a massive object (the lens) may bend the light of a bright background object (the source). The lens’ gravity acts as a huge magnifying glass which bends and magnifies the light of distant stars.

When the gravity of a free-floating planet deflects and focuses light from a distant star, we can observe temporary changes in star brightness. Credit: Jan Skowron / Astronomical Observatory, University of Warsaw.

“If a massive object – a star or a planet – passes between an Earth-based observer and a distant source star, its gravity may deflect and focus light from the source. The observer will measure a short brightening of the source star,” explains Dr. Przemek Mróz, a postdoctoral scholar at the California Institute of Technology and a lead author of the study. “Chances of observing microlensing are extremely slim because three objects – source, lens, and observer – must be nearly perfectly aligned. If we observed only one source star, we would have to wait almost a million year to see the source being microlensed,” he adds.

This is why modern surveys hunting for gravitational microlensing events are monitoring hundreds of millions of stars in the Milky Way center, where the chances of microlensing are highest. The OGLE survey – led by University of Warsaw astronomers – carries out one of such experiments. OGLE is one of the largest and longest sky surveys, it started operations over 28 years ago. Currently, OGLE astronomers are using a 1.3-meter Warsaw Telescope located at Las Campanas Observatory, Chile. Each clear night, they point their telescope to the central regions of the Galaxy and observe hundreds of millions of stars, searching for those which change their brightness. 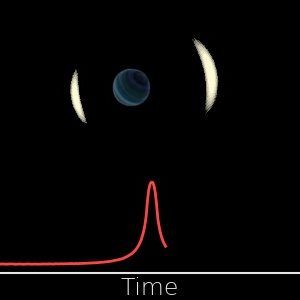 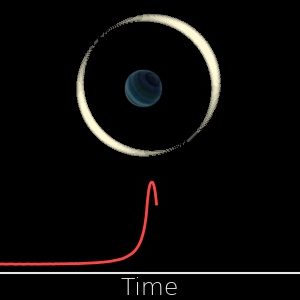 The scientists announced the discovery of the shortest-timescale microlensing event ever found, called OGLE-2016-BLG-1928, which has the timescale of just 42 minutes. “When we first spotted this event, it was clear that it must have been caused by an extremely tiny object,” says Dr. Radosław Poleski from the Astronomical Observatory of the University of Warsaw, a co-author of the study. Indeed, models of the event indicate that the lens must have been less massive than Earth, it was probably a Mars-mass object. Moreover, the lens is likely a rogue planet. “If the lens were orbiting a star, we would detect its presence in the light curve of the event,” adds Dr. Poleski. “We can rule out the planet having a star within about 8 astronomical units – the astronomical unit is the distance between the Earth and the Sun”. 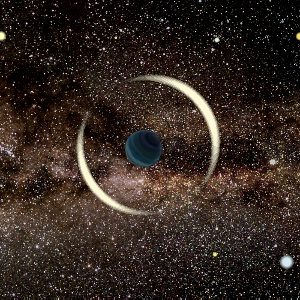 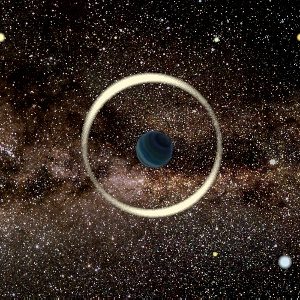 OGLE astronomers provided the first evidence for a large population of rogue planets in the Milky Way a few years ago. However, the newly-detected planet is the smallest rogue world ever found. “Our discovery demonstrates that low-mass free-floating planets can be detected and characterized using ground-based telescopes,” says Prof. Andrzej Udalski, the PI of the OGLE project.

Astronomers suspect that free-floating planets actually formed in protoplanetary disks around stars (as “ordinary” planets) and they have been ejected from their parent planetary systems after gravitational interactions with other bodies, for example, with other planets in the system. Theories of planet formation predict that the ejected planets should be typically smaller than Earth. Thus studying free-floating planets enables us to understand the turbulent past of young planetary systems, such as our solar system.

The search for free-floating planets is one of the science drivers of the Nancy Grace Roman Space Telescope, which is currently being constructed by NASA. The observatory is scheduled to start operations in the mid-2020s.

Because of the brevity of the event, additional observations collected by the Korea Microlensing Telescope Network (KMTNet) were needed to characterize the event. KMTNet operates a network of three telescopes – in Chile, Australia, and South Africa.

The discovery would be impossible without long-term observations conducted by the OGLE sky survey. The project is among the largest and longest sky surveys, it started operations over 28 years ago. One of the first goals of the OGLE survey was searching for and studying dark matter using the gravitational microlensing technique. Current studies cover a large range of topics – searching for exoplanets, studying the structure and evolution of the Milky Way and neighboring galaxies, studies of variable stars, quasars, transients, and solar system bodies.

First generation of stars in the center of the Milky Way
16-11-2015
An international group of researchers with major involvement of astronomers from the Warsaw University Astronomical Observatory based large-scale sky survey OGLE announced a discovery.
The Milky Way in three dimensions
01-08-2019
When Galileo pointed his first telescope at the Milky Way in the early 17th century, he noticed it consists of countless stars. Since that time, studying the properties and history of our Galaxy has absorbed many generations of scientists. Writing in Science, Polish astronomers from the UW Astronomical Observatory present a unique three-dimensional map of the Milky Way.