The Milky Way in three dimensions

When Galileo pointed his first telescope at the Milky Way in the early 17th century, he noticed it consists of countless stars. Since that time, studying the properties and history of our Galaxy has absorbed many generations of scientists. Writing in Science, Polish astronomers from the Astronomical Observatory of the University of Warsaw present a unique three-dimensional map of the Milky Way. The map provides insights into the structure and history of our Galaxy.

Since the 17th century, astronomers have been aware that the Earth, the Sun, and other planets in the Solar System, together with billions of stars seen with telescopes, form our Galaxy. These stars, if observed far from the city lights, look like milk spilled across the sky and form the band of the Milky Way.

Presently, it is believed that the Milky Way is a typical barred spiral galaxy that consists of a bar-shaped core region surrounded by a flat disk of gas, dust, and stars. The disk consists of four spiral arms and has a diameter of about 120,000 light years. The Solar System is located within the disk, about 27,000 light years from the Galactic center, which is why disk’s stars, viewed from within, look like a faint band in the sky, the Milky Way.

The current knowledge about the shape of the Milky Way disk is based on various tracers (such as star counts or radio observations of gas molecules) informed by the extrapolation of structures seen in other galaxies. However, the distances to these tracers are measured indirectly and are model-dependent. The most robust method of studying the shape of the Milky Way would be to directly measure distances to a large sample of stars of a specific type, which would allow one to construct the three-dimensional map of the Galaxy.

Cepheid variable stars are perfect for this task. Cepheids are young pulsating supergiants, their brightness changes in a very regular pattern with a well-defined period which may range from hours to several dozen days.

“Cepheids follow a relation between their pulsation period and luminosity, allowing the intrinsic luminosity of a Cepheid to be inferred from its period. The distance can then be determined by comparing the apparent and intrinsic brightness ,” says Dr. Dorota Skowron, the lead author of the study. She adds: The additional difficulty arises from the presence of interstellar dust and gas which may dim the brightness of a Cepheid. Fortunately, observations in infrared bands reduce these uncertainties.

Distances to Cepheids can be determined with an accuracy better than 5 per cent.

The new three-dimensional map of the Milky Way has been constructed by using a sample of over 2,400 Cepheids, the majority of which have been newly identified in the photometric data collected by the Optical Gravitational Lensing Experiment (OGLE) survey.

“The OGLE survey is among the largest sky variability surveys, it monitors the brightness of almost two billion stars. OGLE collections of variable stars, including Milky Way Cepheids, are the largest in the world and are used by many researchers for various studies of the Universe ,” stresses Prof. Andrzej Udalski, the PI of the OGLE project.

The newly-constructed three-dimensional map of the Milky Way is the first map that is based on direct distances to thousands of individual objects as distant as the expected boundary of the Galactic disk. The map demonstrates that the Milky Way disk is not flat, it is warped at distances greater than 25,000 light years from the Galactic center. 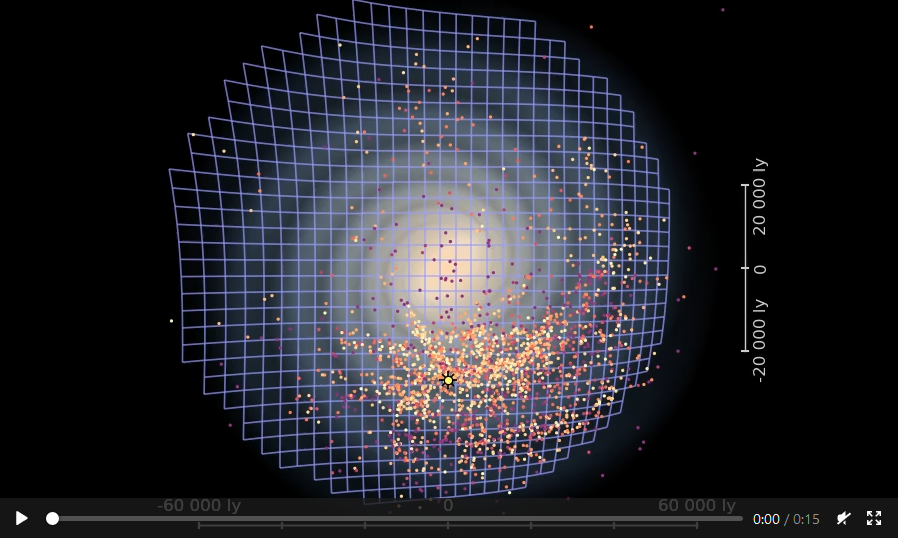 “Warping of the Galactic disk has been detected before, but this is the first time we can use individual objects to trace its shape in three dimensions,” says Przemek Mróz, a graduate student at the University of Warsaw. Stars in the outer parts of the Milky Way disk may be displaced from the Galactic plane by 4,500 light years relative to the central regions of the Galaxy. Warping may have been caused by interactions with satellite galaxies, intergalactic gas, or dark matter.

Cepheids’ age can be determined based on their pulsation periods which has allowed astronomers to perform an age tomography of the Milky Way. The youngest Cepheids are located near the Galactic center, while the eldest – near the Milky Way’s edge.

“We found many elongated substructures in the disk composed of stars of similar age. This indicates that Cepheids located there must have formed around the same time in one of the spiral arms. However, Cepheids that were formed in a spiral arm do not currently follow the exact location of that arm, because rotation velocities of spiral arms and stars are slightly different,” explains Dr. Jan Skowron, the coauthor of the study.

Astronomers performed a simple simulation to test this hypothesis. They injected several star formation episodes into the spiral arms and assigned typical motions and rotation velocities to the stars within them.

“The simulated and observed structures are strikingly similar. This shows that our idea about the recent history of the Galactic disk is plausible and can explain the structures we see,” sums up Dr. Jan Skowron. 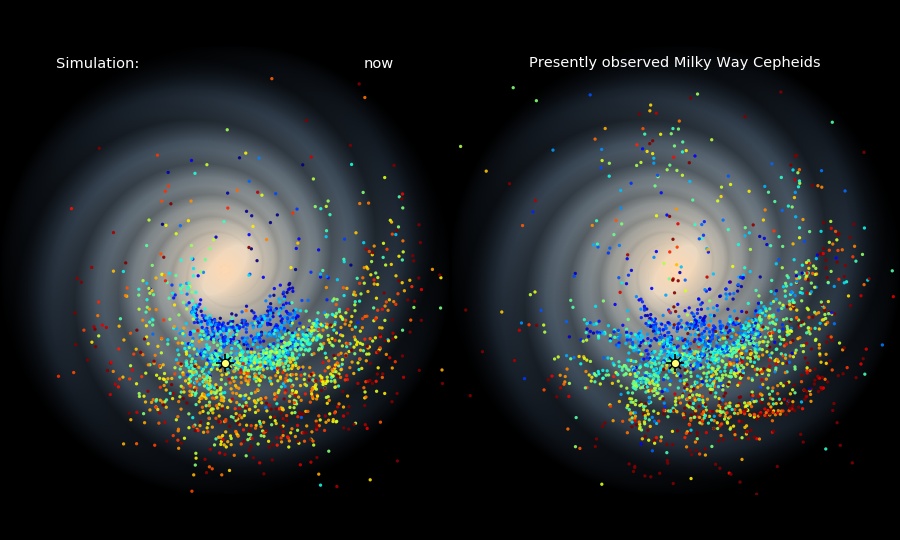 The paper that describes the discovery has been published in Science:

Quantum interference in service of information technology
19-07-2019
Scientists from the Faculty of Physics, University of Warsaw, in collaboration with the University of Oxford and the NIST agency, have shown that quantum interference enables processing of large sets of data faster and more accurately than with standard methods. Their studies may boost applications of quantum technologies in e.g. artificial intelligence, robotics and medical diagnostics. 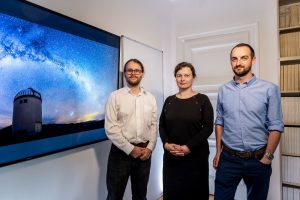 Scientists from the OGLE discovered, among others, the first case of gravitational microlensing in our Galaxy, several exoplanets. The OGLE is also the world leader in studying variable objects – the “OGLE collection” consists of approximately one million previously unknown variable stars. Another very important field of research is the study of the Milky Way and its neighbouring galaxies – Magellanic Clouds, as well as study of the distance scale in the Universe.