Main siteNewsUS Ambassador on what makes someone a good leader

US Ambassador on what makes someone a good leader

“A leader is a person others want to follow, whom people want to see succeed and who wants to help succeed,” Mark F. Brzezinski, the United States Ambassador to Poland, started his speech in the Auditorium Maximum of the University of Warsaw.

The lecture was preceded with a brief presentation of Professor Zbigniew Brzeziński, late father of the US Ambassador to Poland. Prof. Brzeziński served as a counsellor to President Lyndon B. Johnson in the late 1960s, then as a national security adviser in the administration of President Jimmy Carter. He was an instructor and an assistant professor of government at Harvard, and an associate professor of public law and government at Columbia University where he became the first director of Columbia’s Research Institute on Communist Affairs. In 1991 he was conferred the title of doctor honoris causa of the University of Warsaw.

“The Brzezinski family has a very strong position in our country, also here in Warsaw, at this university. Your family contributed to the strong position of Poland, being a recognizable country not only in Europe but also in America,” Professor Alojzy Z. Nowak, UW Rector, addressed the special guest. “When I was a student, at Georgetown University I had a chance to meet your father and take part in a short, yet nice and remarkable, conversation then. I never thought that one day, as a rector of the University of Warsaw, I would have an opportunity to welcome you here and thank you for all you have done to Poland, Ukraine and the whole world.”

Leadership is not conveyed through terror

In his lecture, Ambassador Brzezinski discussed the current situation in Ukraine and defined President Władimir Putin as someone who brought conflict and evil back to Europe. “Putin demands blind loyalty and obedience. He would have us believe that leadership is conveyed through fear, lies and brutality, steal eye gazes, projections of authority and intimidation, jailing, killing and other ways silencing of many citizens who don’t wish to follow,” Brzezinski said.

Mark Brzezinski presented leaders of Ukrainian origin, analysed their personality and work. “Many international observers may have assumed that once the invasion began President Wołodymyr Zełenski would move quickly to evacuate himself and his family to govern in exile from another country. I’m sure he had many opportunities to do that. But when concerns to his safety were raised Zełenski is widely reported to have responded ‘the fight is here, I need ammunition, not a ride.’ With this decision to stay Zełenski faced legitimate threats to his own life as the enemy marked him target no. 1 while his family target no. 2. By remaining in the capital of Kyiv he rallied the nation with his steady hand and with his loyalty to his people. He has become an international symbol of Ukrainian unity,” Brzezinski said.

Brzezinski also referred to Vitali Klitschko, the Mayor of Kyiv, and Oksana Markarova, the Ukrainian Ambassador to the United States. He admired their courage to fight and struggle for the freedom and democracy for Ukrainian citizens. 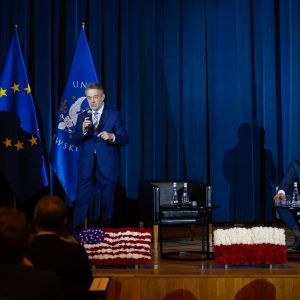 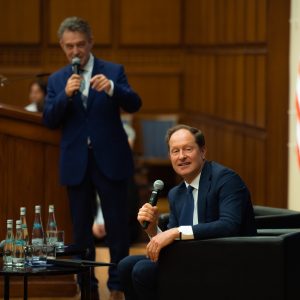 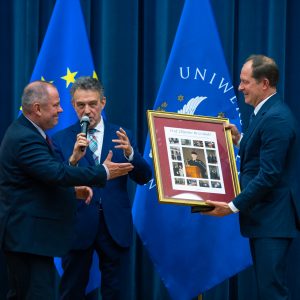 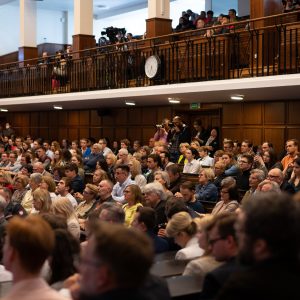 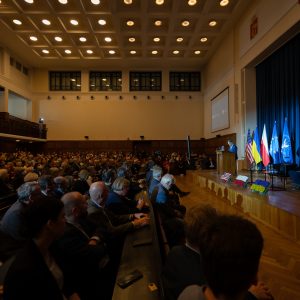 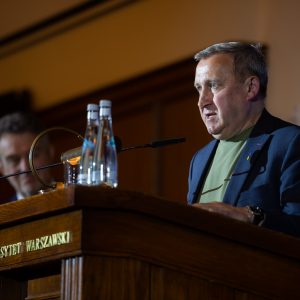 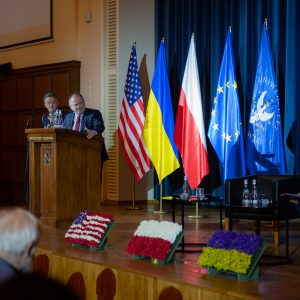 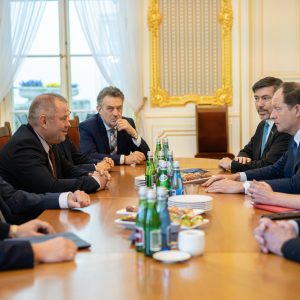 “The United States has shown exceptional leadership against Russia’s aggression. We have never been more committed and engaged with Poland, our allies and partners. There is a political imperative in America to support Ukraine and to support Poland. President Joe Biden sounded the alarm and started uniting allies long before a single tank crossed the border because he made the decision to share intelligence to convince others of the impending danger. President Biden travelled to Poland in March, first to Rzeszów to look East, and then to Warsaw to meet President Andrzej Duda, and the Polish people and the refugees from Ukraine. We all came here to send the message of unity. These visits are far from symbolic,” Brzezinski said. “The United States will defend every square inch of the NATO territory.”

“On behalf of President Biden I am here to thank Poland and Polish people for all you are doing to Ukraine, for your generosity and support, your open hearts and homes for complete strangers,” Brzezinski added. “You are our heroes. Poland is perceived as a humanitarian superpower. I am proud to be the ambassador to the humanitarian superpower.”

Written down in history books

“I’d like to thank you for your words of solidarity and support, thank Poland for your generosity and hospitality with which you brought the Ukrainian people to your homes,” Andrij Deszczyca, the Ambassador of Ukraine to the Republic of Poland, expressed his gratefulness. ”It will be written down in our history. Especially, today, 9th May, which is the Europe Day, as the soviet propaganda used to impose on the Ukrainians to celebrate as Dień Pobiedy.”

The UW signs an agreement with the International Institute for Nuclear Energy
09-05-2022
Representatives of the University of Warsaw, Warsaw University of Technology, and the French Institut international de l’énergie nucléaire (I2EN) signed a cooperation agreement to establish a new framework for students’ education in the field of nuclear energy.
The UW awarded the NAWA funding for Ukrainian students and doctoral candidates
09-05-2022
The National Agency for Academic Exchange (NAWA) granted the funding of 350,000 zł to the University of Warsaw. The awarded funding is allocated for scholarships for students and doctoral candidates who had to flee Ukraine and decided to stay in Poland. 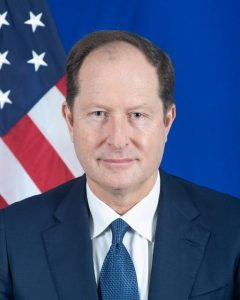 Mark F. Brzezinski was born in 1965, in the USA, and raised in Washington. He is a lawyer, political scientist and diplomat. He completed his BA studies at Dartmouth College, obtained the title of Juris Doctor at the University of Virginia, and a PhD in Political Science from Oxford University.

Between 1999 and 2001, he served on President Bill Clinton’s National Security Council Staff. He was a foreign policy advisor to the presidential campaign of Barack Obama.

From 2011 to 2015, he was appointed the US Ambassador to Sweden. He introduced innovative approaches to advance the US-European trade and implemented key Swedish investments. He also organised the first-ever US Presidential visit to Stockholm.

His 1991 arrival in Warsaw, and the study of the Polish Constitutional Tribunal under the Fulbright Scholar Program, resulted in the book “The Struggle for Constitutionalism in Poland”.

In 2019, he was awarded the Officer’s Cross of the Order of Merit of the Republic of Poland.

On 22 December 2021 Mark Brzezinski was officially sworn in as the new US Ambassador to Poland.