In the first category: Top 10 Discoveries of 2015,”The Berenike Project” working in a Roman harbor in Berenike on the Red Sea coast was distinguished. The mission, which is a joint project of the PCMA and University of Delaware, co-directed by Iwona Zych and Prof. Steven Sidebotham, received an award for the season’s finds. They included fragments of a Pharaonic stele that place the beginnings of the site at a much earlier date than previously thought, at a time when the Pharaohs of the Middle Kingdom conducted large-scale expeditions to the south of the African continent. Another major finding of the 2015 season were subterranean installations that may have served for capturing drinking water for the garrison of Ptolemy II, the historical founder of the port in early 3rd century BC.

In the second category: top 5 Restoration/ Preservation projects, one of PCMA’s most prestigious projects was awarded: “The Polish-Egyptian Archaeological and Conservation Mission at the Temple of Hatshepsut at Deir el-Bahari” directed by Dr Zbigniew E. Szafrański. Polish Egyptologists, archaeologists, architects and conservators have been working at this UNESCO heritage site since 1961, restoring the richly-decorated rooms of the Upper Terrace of the temple and working on preparing them for tourists. The Solar Cult Complex in the Temple of Hatshepsut in Deir el-Bahari, reconstructed by the mission, was be opened to visitors in February 2015. One of the major results of the Polish team’s work was the discovery of the Temple of Tutmosis III, Hatshepsut’s nephew. The PCMA mission has recreated this structure that had been swept from the ground by an ancient earthquake. 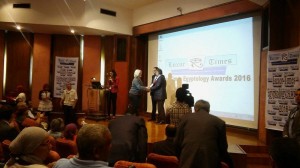