Prof. Włodzimierz Borodziej from UW was awarded the International Research Award of the Max Weber Foundation in cooperation with the Historisches Kolleg in Munich.

Prof. Włodzimierz Borodziej is a historian working at the University of Warsaw Faculty of History. He specializes in contemporary European history with a particular focus on Polish-German relations.

The Max Weber Foundation awarded Prof. Borodziej the International Research Award 2020. The award aims to recognize the achievements of those scholars whose work has made an exemplary contribution to international research in the fields of the humanities and social and cultural sciences.

“Włodzimierz Borodziej is a highly respected scholar, who has been most closely connected with Germany not only as a researcher but as a scientific organiser as well,” stressed in a statement Prof. Dr. Hans van Ess, the President of the Max Weber Foundation. He continued: “For decades, he (Prof. Borodziej) has been working successfully to mediate between academic cultures in the humanities, and giving a broader public a better understanding of the history of both countries. Włodzimierz Borodziej has made a substantial contribution towards engaging with the difficult experiences in Polish-German history in an intelligible, constructive and objective manner.”

The selection was undertaken by an equal number of representatives from the Max Weber Foundation and the Board of Trustees of the Historisches Kolleg. Beside scientific achievements of Prof. Borodziej, the jury took into account the role of a candidate as a bridge between the academic cultures of their own country and Germany.

The International Research Award is worth € 30 000. The laureate has an option of 2-month research stay at the Historisches Kolleg in Munich, as well as an opportunity to exchange views with the Fellows at the Kolleg, using the local research facilities.

Prof. Borodziej has also been working at universities in Magdeburg and Jena. From 2010 to 2016, he was one of two directors of the Imre Kertész Kolleg Jena – an institute for the interdisciplinary and transnational study of the historical events of the 20th century in East-Central and Southeastern Europe.

The abundance of plant species in Europe’s forests is decreasing as a result of the displacement of local species by the widespread
Prof. Andrzej Tarlecki on new regulations regarding staff matters
Tags: awards, Faculty of History, history, research

ERC awarded its Advanced Grant to a UW scientist
31-03-2020
Prof. Stefan Dziembowski from the UW Faculty of Mathematics, Informatics and Mechanics has been awarded an ERC Advanced Grant for his project entitled “Smart-Contract Protocols: Theory for Applications”. PROCONTRA is an acronym for the project. 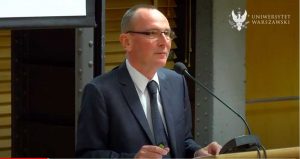 Prof. Włodzimierz Borodziej during the lecture at the University of Warsaw.