“I would like to bow down low to the Ukrainian people, the ones who have been brutally attacked by the Moscow regime. Truly, having no words to utter but ‘barbarism’, I wish to express my – our – solidarity, support and sympathy. For me, the attack on Ukraine, a free and sovereign country, is the attack on Europe,” started her speech Olga Tokarczuk. On 23rd February she was honoured with the title of doctor honoris causa of the University of Warsaw.

The ceremony of awarding the honorary title took place on 23rd February in the Senate Hall of Kazimierzowski Palace, University of Warsaw campus at Krakowskie Przedmieście Street. Due to the pandemic situation, the previous date of the ceremony was changed. The video recording of the event is available on the UW profile on YouTube.

“It has been a long time for us to wait for you to return to your homeland and your roots. It is our great honour to host you here on the day so important to you and the academic community. In December 2020, the Senate adopted the resolution conferring the highest and most meaningful distinction – doctor honoris causa of the University of Warsaw. The resolution was passed by acclamation, since your literary and social work realise the most valuable and significant mission of the University, which is human dignity, respect, tolerance, identity and search for the truth,” said Professor Alojzy Z. Nowak, UW Rector, in his opening speech. 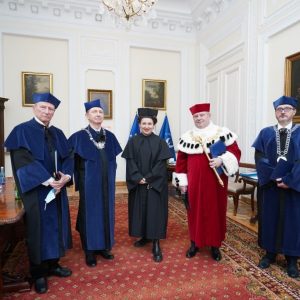 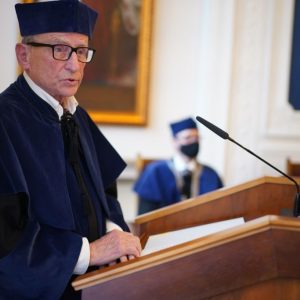 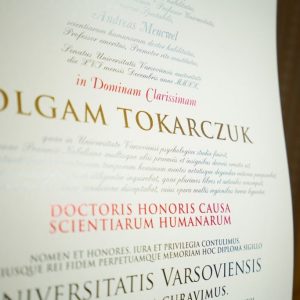 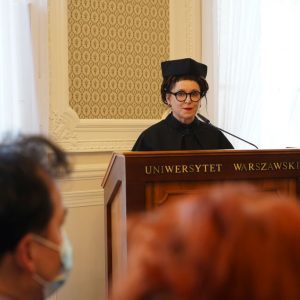 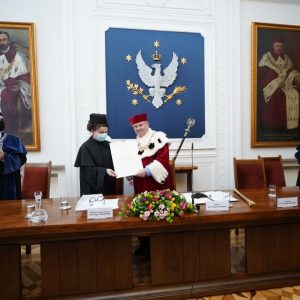 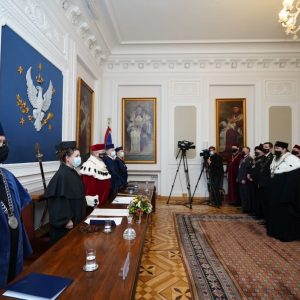 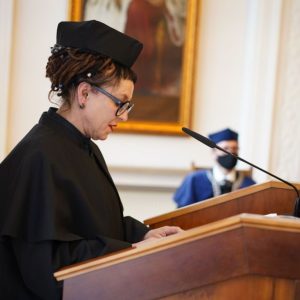 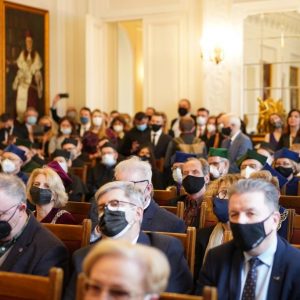 Olga Tokarczuk, the University of Warsaw graduate majoring in the Polish studies, is considered one of the most outstanding representatives of modern literature in Poland and abroad. She is an author of creative novels, short prose texts, essays, poems and spectacular scripts. For her novel Flights (Bieguni) she has been awarded the 2018 Man Booker International Prize, and two Nike Awards for: Flights (Bieguni) in 2008, and The Books of Jacob (Księgi Jakubowe) in 2015.

In 2019, the Swedish Academy and the Nobel Foundation distinguished “the narrative imagination that with encyclopaedic passion represents the crossing of boundaries as a form of life” and, in 2018, awarded the Nobel Prize in Literature to Olga Tokarczuk. Thus, the writer joined the Nobel Prize laureates from the University of Warsaw. In the UW history, six of its graduates were awarded the Nobel Prize: Henryk Sienkiewicz, Czesław Miłosz, Józef Rotblat, Leonid Hurwicz and Menachem Begin.

“The laureate’s ground-breaking work goes beyond academic formulas. Any referring word claims its explication,” Prof. Andrzej Mencwel started his laudation in honour of Olga Tokarczuk. He emphasized mythological powers of her writing, “her gift for creating mythical or mythicized characters that pre-exist somewhere in interexistance,” and “opens sensitivity to any living beings”.

“She is an original Polish writer, untouched by any mutation of the eternal Polishness complex, neither nation’s peacock, nor a parrot. Therefore, neither she craves for superiority, nor inferiority, because her time and place are always appropriate,” exclaimed the honorary doctorate adviser.

“To perceive the world and understand a human being, you can search for various ways. Admittedly, it is our sheer human curiosity pushing us toward the world and people but the true comprehension is impossible without being open to others, without the so-named ‘sensitivity’ to the world, the surroundings and the living beings. Sensitivity soaked through with affection is bestowed by Olga Tokarczuk,” said Prof. Zbigniew Greń, dean of the UW Faculty of Polish Studies. “I would be more than honoured if you accept the best wishes. Please remain strong and persistent to reveal the intricacy of the internal and external worlds, of human beings and all living beings,” he added.

“In the history of the University of Warsaw this event is unprecedented. Alma Mater Varsoviensis has already awarded honorary professor or doctor titles to the Nobel laureates, but never before the University conferred the honorary title to the person who is both the Nobel Prize laureate and the alumna of the University of Warsaw,” said Prof. Robert Sucharski, dean of the Faculty of “Artes Liberales”. “This ceremony takes place on a very special day. The Gutenberg Bible is the first great book printed on the assumed date of 23rd February 1455. Almost 600 years later, another book was printed, the book that revealed absolutely fundamental to our culture and civilization. It is a remarkable coincidence,” he concluded.

Testing the limits and critical thinking

The Nobel laureate wondered whether the speech, which had prepared dozen months ago, could be delivered in the current political and military situation. “In such a pathetic time, I must admit having doubts to use the words I carefully prepared over a year ago. If this censoring time of the suppression of speech and writing, the time of dismissing theatre directors and implementing the educational reform, is the proper time for my lecture, which I was elaborating months earlier. My lecture praises the imagination and the joy of thinking. It is an optimistic text which proves that thinking makes people free. Anyway, the decision has been made,” said Olga Tokarczuk.

Olga Tokarczuk looked back to the beginning of her studies at the University of Warsaw. “This moment is very special, exceptional throughout my life – the recognition of my work by my Alma Mater, the most important university for me. I arrived in Warsaw to commence my studies in August 1980. I was carrying a backpack full of books and food to complete my student placement before starting the first year. Through five years of the studies I was setting my inner maps, developing my language to describe the reality. I made friends for life, I formed political opinions of mine. Students’ protests I took part in, in the building of the Faculty of Psychology, then in the building of the Faculty of Philosophy, were an excellent lesson of civic education. In this incredible and magnificent moment I need to express my gratitude to the professors for opening my eyes and my heart. I am immensely grateful they taught me to sail throughout the endless science and aroused the need for a continuous quest, testing the limits and critical thinking,” said the Nobel Prize laureate.

Honorary doctorate titles have been awarded by the University of Warsaw since 1921. The first honoris causa title was conferred on Marshal Józef Piłsudski. Since then, Ludwik de Broglie, Jaroslav Heyrovsky, Fryderyk Joliot-Curie, Cecil Frank Powell, Niels Bohr, Riccardo Giacconi, Shuji Nakamura, as well as a laureate of the ACM Turing Award, Charles Antony Richard Hoare, have received an honorary title from UW. 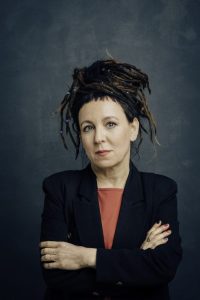