Researchers from the UW Faculty of Physics, University of Cambridge, Queen Mary University of London and University of Sofia have shown that slow cooling of a suspension of oil droplets with surfactant in water may lead to non-spherical shapes of the droplets, which can produce filamentous structures resembling bacterial flagella. The filaments induce motion of the droplets, and the process is fully reversible via cyclic changes of the temperature of their environment. An article describing the findings has just been published in “Nature Physics”.

The new research article by researchers from the UW Faculty of Physics, University of Cambridge, Queen Mary University of London and University of Sofia has been published in “Nature Physics”. It explores the behaviour of a suspension of oil microdroplets with the addition of a surfactant in water. The droplets have a diameter of about 20 micrometers, so they are visible under a microscope. When steadily cooling the droplets, at temperatures close to 2–8 degrees Celsius, the surfactant molecules inside the oil droplets start forming a plastic phase and by that deforming the droplets in such a way that they start extruding elongated filament-like structures at one or a few spots on the surface. The extrusion of elastic appendages induces motion of the droplets in a way similar to the motion of microscopic swimmers, such as bacteria. The droplets are rechargeable – by reversing the cooling process, they retract the filaments.

– We present a new class of active, elastic microswimmers produced by simply cooling a 3-component emulsion. They are easy to control and cheap to fabricate – says Dr. Maciej Lisicki from the Faculty of Physics, University of Warsaw. – By changing the external temperature and controlling the cooling rate we are able to see the formation of intricate and beautiful geometric structures resembling flagella of swimming microorganisms – the scientist adds. Surfactants used in this study are biocompatible and the system could be useful for further studies of the dynamics of active matter, particularly in mixed systems of artificial and biological microswimmers to investigate collective effects. 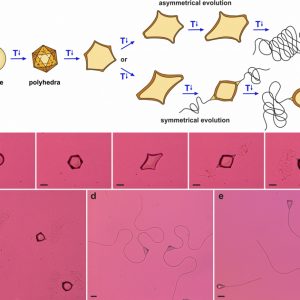 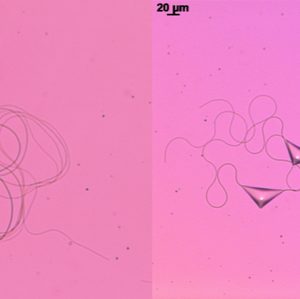 The filaments extruded by the droplets induce swimming motion of the droplets in a manner similar to microscopic swimming organisms, such as bacteria and ciliates. This simple artificial design can give us new insights into the physics of microscale swimming. Upload video >> Video credit: D. Cholakova, University of Sofia.

– By coupling the buckling instability with filament extrusion we reveal the details of this mode of swimming, which provides new insights into the motion of microswimmers. Using the theoretical tools of microscale fluid dynamics, we are able to understand why these tails form, explain their shapes, and quantify the resulting motion of the droplets – explains Dr. Lisicki.

The work results from a long-standing international collaboration between researchers from Poland, Bulgaria, and the United Kingdom. The droplets were synthesised and experiments were performed by the team led by Prof. Nikolai Denkov at the University of Sofia, in collaboration with the group of Dr. Stoyan Smoukov at Queen Mary University of London. The description of motion in such a system requires considering both the elastic deformation of the filaments, and their hydrodynamic resistance. The model predicts the swimming speed of the oil droplets depending on the elastic properties of the solidified filaments. The theoretical model describing the dynamics of these novel active particles was constructed by Dr. Maciej Lisicki (Warsaw), Dr. Gabriele De Canio and Prof. Eric Lauga (Cambridge).

Supercomputing Frontiers Europe 2021
14-07-2021
On 19th-23rd July, the Interdisciplinary Centre for Mathematical and Computational Modelling of UW organises an online international conference on trends and innovations in high-performance computing and computational science Supercomputing Frontiers Europe 2021. It is the 7th edition of the annual meeting.
Einstein Telescope included in ESFRI Roadmap 2021
02-07-2021
The Einstein Telescope is the first and most advanced third-generation gravitational-wave observatory, with unprecedented sensitivity that will put Europe at the forefront of gravitation waves research. The European Strategy Forum on Research Infrastructures (ESFRI) included it in its Roadmap 2021. In Poland, the ET consortium is led by the Astronomical Observatory of the University of Warsaw.

Press office of the Faculty of Physics, University of Warsaw