On 25th October students of the UW have won the XX Polish Academic Collegiate Programming Contest. 4 another university’s teams were among the top 10.

51 teams have taken part in an academic competition at the University of Wrocław. The University of Warsaw was represented by 9 teams from the Faculty of Mathematics, Informatics and Mechanics. One of them, consisted of Kamil Dębowski, Błażej Magnowski, Marek Sommer, has won. This team solved 8 out of 12 tasks, prepared by the organizers.

The University of Warsaw has occupied also different places in the competition:

First five teams got the scholarships of the University of Warsaw.

Best teams will be participating in eliminations to the world finals of the Central Europe Regional Contest. Unfortunately, only one team of the UW will be able to present itself in the finals. Trainings for students prepared Tomasz Kociumaka i Adam Karczmarz. 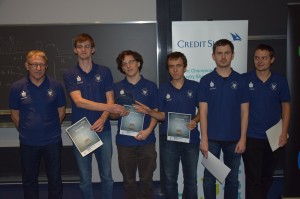