Honorary Degree for a French historian

Professor Alain Besançon, a French historian, political scientist and Sovietologist, was awarded the title of Doctor Honoris Causa of the University of Warsaw. The awarding ceremony took place on the 5th November.

– Fate made me a historian of Russia. I would not be in this place today if I were not educated by so many distinguished Polish teachers – said Professor Besançon in his speech.

The idea to award Mr. Besançon with the honorary doctorate originated in the Centre for East European Studies, and the authorities of three Faculties requested the initiation of the procedure: the Faculty of Journalism and Political Science, Faculty of History and Faculty of Modern Languages. – Professor Alain Besançon is an exceptional person whose remarkable scientific achievements, as well as immense contribution to the popularization of knowledge about Russia and the Soviet Union, are invaluable – said professor Janusz Adamowski, the dean of the Faculty of Journalism and Political Science. The honorary degree was awarded to Mr. Besançon by force of a resolution of the Senate of the University of Warsaw.

The laudatory speech was delivered by Jan Malicki, the director of the Centre for East European Studies UW:  – The University of Warsaw, awarding this highest distinction to Professor Alain Besançon, distinguishes not only the man who has had many warm feelings for Poland, but also a remarkable scholar, one of the greatest living Sovietologists.  – he summed up.

Alain Besançon is the scientific director of the School for Advanced Studies in the Social Sciences in Paris, a historian specializing in Russia, a political thinker, essayist, an insightful analyst of totalitarian systems, a founding father of the quarterly “Commentaire”, member of Institut de France and the Cavalier of the Legion of Honour. He is also an author of numerous scientific publications, his works were translated into the majority of world languages, including Polish (among others, “Sainte Russie”, “Le Malheur du siècle, Anatomie d’un spectre”).

Professor Besançon for many years was engaged in Polish struggle for independence and democracy. He appealed many times to the broad public in the West for respecting of human rights and sovereignty of our country. In 2007, in the light of his enormous contribution and engagement in the affairs of Poland, he received the Commander’s Cross of the Order of Merit of the Republic of Poland. 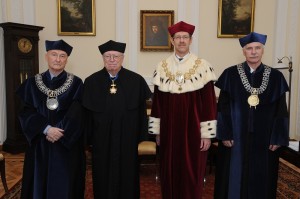