“The last two decades witness an enormous interest in the abortion law,” says Prof. Marta Bucholc from the University of Warsaw, a laureate of the ERC Consolidator Grant. Nowadays legal governance of abortion  is framed as a part of the debates about the most fundamental human rights: the right to life and liberty, the right to health, freedom from slavery and torture, and many more. Why legal orders that belong to the same human rights system are so different, or even contradictory?

Professor Marta Bucholc from the Faculty of Sociology, the University of Warsaw, received the ERC Consolidator Grant. This year it is the fifth grant won by the University of Warsaw, and the first grant in this category, from the European Research Council. The laureate will scrutinise the influence of the international law on debates in the field of abortion law modifications in selected countries. The project “Using Human Rights to Change Abortion Law: Involvement Patterns and Argumentative Architectures in the Global Figuration of Human Rights” uses the method of the sociological discourse analysis, comparative law and linguistics. The overall budget of the project amounts to € 2 million.

One system vs. local discrepancies

Six countries that represent three regional human rights systems have been selected for the study: Poland and Ireland (the Council of Europe), Argentina and Honduras (the Organisation of American States), and Senegal and Mozambique (the African Union). Each country hosted a national debate on abortion and its modifications in their legal system in the recent decade, and in each pair of countries, both the tendency towards a more restrictive and a more liberal regulation of abortion within the same regional human rights system is displayed.

“Regulations of the abortion law tend to split in various dimensions. Some countries, like Poland, are inclined to introduce or uphold more restrictive regulations whereas other countries, e.g. Ireland, are determined to liberalise or repeal the restrictions,” says Prof. Bucholc. “Surprisingly, major discrepancies are found not only between the regional human rights systems but also within the regional systems where the same international agreements should be followed and the same decisions of the international tribunals should be respected by each country. So, say, the European countries of the Council of Europe and the jurisprudence of the European Court of Human Rights in Strasbourg. Thus, it might be expected that the legal regulations in the countries of the same system would tend to get more and more similar to each other, and that the changes in the abortion laws would shift in the same direction. This is not actually happening, though. I intend to find out why that is the case,” the researcher adds.

In each of the countries subject to the analysis the change of the abortion law was accomplished with different legal means. For example, in Poland, it was a ruling of the Constitutional Tribunal that delegalized abortion for irreversible impairments of a foetus, whereas in Ireland the national referendum overturned the abortion ban. However, in all the  debates on abortion laws arguments that refer to human rights were used. “Everyone argues with for human rights to support virtually any position on abortion, but the arguments are different and based on different meanings of human rights. Each debate is locally and regionally specific, and I expect each of them to show a different architecture,” says Prof. Bucholc.

As the researcher recounts, “In Poland, the advocates of a more restrictive abortion law frequently invoke the Christian heritage and religious roots of the Polish national identity. Naturally, such arguments are omnipresent in other countries, too, especially in traditional Christian and Muslim communities. But we also come across arguments that are particular only to some local or regional debates, for example the references to the rights of persons with disabilities in Poland, to the children’s rights of minor pregnant persons in many African countries, or to the right to privacy in the United States”.

By the mixed-method research design, Prof. Marta Bucholc’s future team will bridge three levels of the global figuration of human rights, using the tools of qualitative sociology, the legal analysis, corpus linguistics, and the network analysis, which have never been all used together in the study of human rights before. “This combination has a great advantage of separating involvement in arguments from economic, political, cultural and religious issues typical to a given country. Although the study is conducted in six different countries, methodological nationalism will be avoided by focusing not on a country but on an argumentative architecture, thus producing findings more suitable for a comparative analysis,” describes the researcher.

To explain the ambivalence of human rights, the debates will apply concepts of argumentative architecture and involvement patterns based on Norbert Elias’s theory of social processes. Human rights will be approached multi-dimensionally. The research team will study the structure, composition and embedding of arguments, together with group perspectives, emotions and circles of identification of the debaters. Constructing a global meta-typology of argumentative architectures and involvement patterns in abortion debates will allow to explore the integrative potential of human rights and identify the centrifugal forces in human rights figuration that comprise the local, regional and global levels.

“The study of legal acts and decisions, as well as social and political debates will exploit methods of corpus linguistics”, says Prof. Bucholc. The project is supported by the CLARIN-PL Language Technology Centre at the Wrocław University of Technology. “We are going to study the language: its vocabularies, phrases or collocations, as well as the emotions and contexts they convey,” she adds.

The project “Using Human Rights to Change Abortion Law: Involvement Patterns and Argumentative Architectures in the Global Figuration of Human Rights” has been awarded nearly €2 million for a period of 60 months. 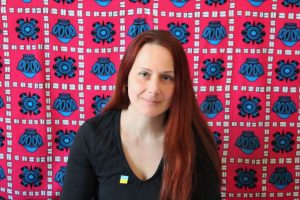 Professor Marta Bucholc graduated the University of Warsaw majoring in sociology, philosophy and law. She holds the position of associate professor at the Department of the History of Social Thought, the Faculty of Sociology, the University of Warsaw. She is also an associate researcher at the Centre de Recherche en Science Politique Université Saint-Louis Bruxelles in Belgium. Between 2015-2020 she was employed at the University of Bonn as a research professor at the Käte Hamburger Center for Advanced Study in the Humanities “Law as Culture”. She specialises in the sociology of law, historical sociology and sociological theory. She is an expert in Norbert Elias’s figurational sociology, and her current work aims at expanding the figurational paradigm on the area of socio-legal studies and in particular the research of legal cultures.

Currently, Prof. Bucholc is the Principal Investigator in the SONATA BIS National Science Centre project “The National Habitus Formation and the Process of Civilization in Poland after 1989: A Figurational Approach”, and the Polish PI in the Volkswagen Foundation project “Towards Illiberal Constitutionalism in East Central Europe, both at the University of Warsaw.

Three ERC Grants for UW
10-01-2022
Three researchers from the University of Warsaw among the latest recipients of the European Research Council (ERC) Starting Grants. The successful UW researchers are: Dr Paweł Nowakowski from the Faculty of History, Dr Dorota Skowron from the Astronomical Observatory at the Faculty of Physics and Assoc. Prof. Michał Tomza from the Faculty of Physics.
Mirror images
15-02-2022
“Most of the biological molecules forming the human body are chiral, which means that they differ from their mirror images, much like hands. Therefore, my ERC Starting Grant aims to investigate a new branch of nuclear spectroscopy (NMER) that is based on chirality-sensitive magnetoelectric effects. Such effects are due to interactions involving nuclear magnetic moments, magnetic and electric field
Assoc. Prof. Michał Tomza ERC grant winner
11-01-2022
The ERC project, which is led by Assoc. Prof. Michał Tomza from the UW Faculty of Physics, deals with matters of ultracold quantum physics and chemistry “This project aims to understand and harness the increasing complexity of ultracold polyatomic molecules to probe the fundamentals of chemistry and physics,” Prof. Tomza explained.