Student representation of the University of Warsaw has won the 2015 Central Europe Regional Contest.

The Central Europe Regional Contest was held from 13th to 15th November in Zagreb. This competition is an elimination to the 2016 ACM International Collegiate Programming Contest World Finals in Thailand.

60 teams from the best universities in Austria, Croatia, Czech Republic, Poland, Slovakia, Slovenia and Hungary have taken part in that competition. The University of Warsaw was represented by the team from the Faculty of Mathematics, Informatics and Mechanics. The organizers prepared 12 interesting, however, very hard tasks to solve.

The winners with prof. Jan Madey and prof. Krzysztof Diks 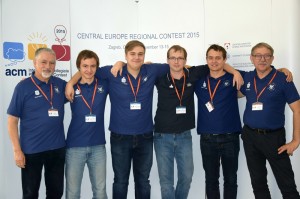