The Kuwaiti-Polish Archaeological Mission was initiated in 2006, after meetings by representatives of the National Council of Culture Arts and Letters of the State of Kuwait and the Polish Centre of Mediterranean Archaeology of the University of Warsaw. It was the first Polish excavation project in the Arabian Peninsula. The Polish leg of the project is headed by Prof. Piotr Bieliński from the University of Warsaw.

The mission started work in Northern Kuwait in 2007, beginning with excavations of tumuli graves (2007-2008), then expanding into several sub-projects, including the excavation of desert wells (2008-2012), a survey of burials and other structures in the Al-Subiyah region (2009-2012), the excavation of the Bahra 1 settlement (since 2009). Apart from the investigations in Northern Kuwait, the mission has been invited to work on the Failaka Island, where more sub-projects were initiated: excavations of a part of the Qusur site (2011-2013), a survey along parts of the island’s shoreline and excavations in Kharaib el-Desht, combined with an underwater survey.

During the opening of the exhibition the Ambassador of the Republic of Poland to the State of Kuwait – Grzegorz Olszak awarded Prof. Piotr Bieliński with the Bene Merito – a Polish distinction given by the Polish Minister of Foreign Affairs to people in recognition of their merits in promoting Poland abroad. Besides Prof. Bieliński, the Secretary-General of the Kuwaiti National Council for Culture, Arts and Letters received the distinction. A certificate of appreciation was awarded also to Dr. Sultan al-Duwaish, the Director of the Department of Antiquities and Museums and the Co-Director of the Kuwaiti-Polish Archaeological Mission.

The event was co-organized by the National Council for Culture Arts and Letters of the State of Kuwait, Polish Embassy in Kuwait and the Polish Centre of Mediterranean Archaeology of the University of Warsaw. 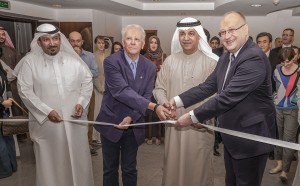 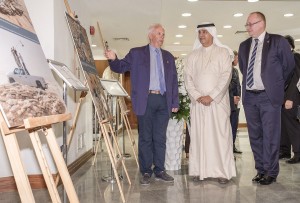 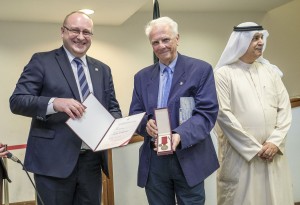