Warsaw Eagles with a gold medal

The University of Warsaw Team – Warsaw Eagles – was on the second place and won a gold medal in the ACM ICPC 2017 World Finals in Rapid City in South Dakota.

The team from the UW, consisting of students from the Faculty of Mathematics, Informatics and Mechanics: Wojciech Nadara, Marcin Smulewicz and Marek Sokołowski, won 1 of 4 gold medals and was ranked 2. Warsaw Eagles solved 10 of 12 problems prepared by organisers. The team from the St. Petersburg ITMO University solved the same number of problems.

Warsaw Eagles won the Central Europe Regional Contest in Zagreb and got the right to take part in the World Finals in Rapid City.

So far, 24 teams from the University of Warsaw have participated in the ACM ICPC World Finals. Since 2012, the UW teams have been bringing medals from this contest. In 2003 and 2007 our students won gold medals and were ranked 1st..

Prof. Jan Madey, Prof. Krzysztof Diks and Tomasz Kociumaka from the Faculty of Mathematics, Informatics and Mechanics of the UW are the coaches of Warsaw Eagles. In Rapid City, Prof. Jan Madey was awarded the Lifetime Coach Award. 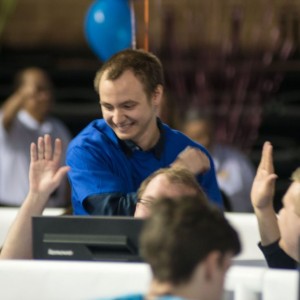 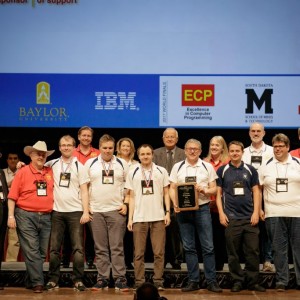 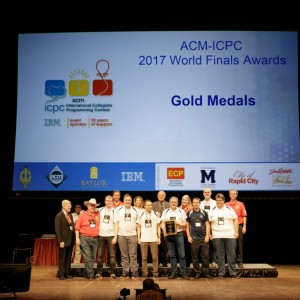 PKO Bank Polski is the main sponsor of the UW team.