The European Research Council has announced the winners of its latest Consolidator Grant competition. Among them is Professor Justyna Olko from the Faculty of “Artes Liberales” of the University of Warsaw who has received funding for implementing the MULTILING-HIST project. The project addresses the complex, multi-level dimensions of historical and contemporary multilingualism, focusing on its emergence, continuity, reduction and loss. It is the second ERC grant awarded to Professor Justyna Olko.

Professor Justyna Olko’s research team will carry out the “Multilingual worlds – neglected histories. Uncovering their emergence, continuity and loss in past and present societies” (MULTILING-HIST) project. Its main aim is to reconstruct, explain and better understand the mechanisms and causality of the processes behind the emergence, continuity, reduction and loss (as well as possible re-emergence) of multilingualism in differing historical, geographical, social, political and cultural contexts.

ERC Consolidator grants enable grantees to consolidate their teams and have a far-reaching impact. Professor Justyna Olko’s project will embrace historical and contemporary contexts from four continents relevant for understanding the causal frameworks underlying multilingual trajectories: selected multilingual hotspots are from Central-Eastern Europe, Mesoamerica, South Africa and the Archipelago of Vanuatu. They represent a diversity of pre-colonial, colonial and post-colonial contexts, ensuring a meaningful comparison.

“We are planning to explain how and why local multilingualism emerges, what contributes to its continuity, why it erodes, and how it can re-emerge. MULTILING-HIST will address not only essential gaps in the state of knowledge but also significant questions about the past and the present of human development,” explains Professor Justyna Olko, who won the ERC grant.

The project will be carried out at the Center for Research and Practice in Cultural Continuity at the UW Faculty of “Artes Liberales” with the contribution of two partner institutions. Working closely with Professor Justyna Olko will be two key team members, Dr. Heidi Colleran from the Max Planck Institute for Evolutionary Anthropology, and Dr. Alexander Andrason representing Stellenbosch University (RSA). The multidisciplinary team will also comprise five postdoc researchers and five doctoral candidates, specializing in the history and sociolinguistics of Central-Eastern Europe, Mesoamerica, South Africa and Vanuatu and in mathematical modelling. Experts and contributors from local communities on the four continents will also be part of the project’s team.

Today as many as 54% of Europeans are reported to be bilingual, 25% trilingual, and 10% quadrilingual. However, their second and subsequent languages are usually foreign languages learned because of their market, prestige or symbolic value, according to the European Commission. Except in cases of dynamically changing urban multilingualism in which migrants’ languages are used, this multilingual competence does not typically embrace languages spoken locally on a regular basis. However, situations described as ‘stable’ or ‘balanced’ multilingualism existed in most parts of the world, including Europe, at least until the mid-twentieth century, and persist today in some regions. Yet, in modern nation states, the existence of multilingualism has been denied or neglected for political and ideological reasons.

“How does individual and societal multilingualism emerge and expand on local and regional levels? What makes it stable? Which configurations of factors, conditions and behaviours assure its trans-generational transmission and/or expansion? How does it change over time? These are some of the questions we are going to address in our project,” indicates Professor Justyna Olko.

The proposed approach is based on both the case-internal analysis and cross-case comparison of micro-, meso- and macro-level historical processes, including a wide range of factors. The project will examine, on the one hand, environmental, economic, socio-political and cultural factors, and on the other hand, sociolinguistic factors. The latter embrace patterns of daily social interaction and communication, including language choices and social networks of speakers, ways of language transmission and socialization, local language hierarchies, language ideologies, and the presence of writing systems. A multidisciplinary approach will combine historical and present data, qualitative and quantitative methods as well as mathematical modelling, data-driven mapping and GIS mapping in novel ways.

The past as the key to understanding the present

The MULTILING-HIST project embraces individual multilingualism in local and regional settings, and the multilingual settings themselves, or societal multilingualism. The team will explore the constellations of languages spoken in specific places and study how they relate to individual multilingual competence over time. Thus, the research is about “asking large questions in small places”. One of the novel aspects of the project is its joint focus on a broad range of rural and small urban communities, but with the consideration of larger urban contexts that will spawn comparative insights. This approach will build on and expand the emerging research on small-scale rural and ‘egalitarian’ multilingualism in Africa, Australia, America, and Oceania. It will also explore how (post)colonial languages transform this ‘egalitarian’ multilingualism at local levels where languages often have fluid boundaries and index different aspects of complex identities.

“I am convinced that it is the past that holds the key to understanding the conditions of stable (transferred across generations) and unstable multilingualism as key aspects of human development. The principal goal of the project, therefore, is to uncover the processes of stability and instability in multilingualism, identifying their key factors and explaining their mechanisms,” says Professor Justyna Olko.

The project will provide diagnoses and predictions with great potential for improving existing language policies and educational strategies oriented toward the preservation of linguistic-cultural diversity and sustainable multilingualism. 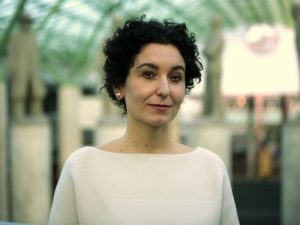 Justyna Olko has been working at the University of Warsaw since 2000. Her research embraces ethnohistory, anthropology, sociolinguistics and contact linguistics, with a special focus on Indigenous and minority cultures and languages that are currently endangered. She is the first female scholar and the first representative of the humanities and social sciences in Poland that has been awarded the European Research Council grant twice. In 2012, Professor Justyna Olko received the Starting Grant for the project entitled “Europe and America in Contact: A Multidisciplinary Study of Cross-Cultural Transfer in the New World Across Time”. This was the first ERC grant for the humanities in Poland. She is also a laureate of the Focus and Team Programs of the Foundation for Polish Science. In November of this year she became a winner of the Falling Walls Science Breakthrough of the Year in social sciences and humanities for “Breaking the walls between Academy and local communities in favour of linguistic diversity”.

Information on the project:

UW scientist won the 2020 IJCAI Computers and Thought Award
26-11-2020
Dr. Piotr Skowron from the UW Faculty of Mathematics, Informatics and Mechanics is the winner of the 2020 IJCAI Computers and Thought Award. The International Joint Conference on Artificial Intelligence (IJCAI) recognised his contributions to computational social choice and the theory of committee elections.

The European Research Council, set up by the European Union in 2007, is the premiere European funding organisation for excellent frontier research. Every year, it selects and funds the very best creative researchers of any nationality or age, to run projects based in Europe. It offers four core grant schemes: Starting, Consolidator, Advanced and Synergy Grants. With its additional Proof of Concept grant scheme, the ERC helps grantees to bridge the gap between grantees’ pioneering research and the early phases of its commercialisation.

As yet ERC has awarded 19 researchers from the University of Warsaw.