Archaeologists carried out research on a large settlement located in Armenian Metsamor. They found bronze rings and decorated bone elements of horse harness.

The ruins of Metsamor, a Bronze Age fortified city and cemetery, sit on and around a volcanic hill within sight of Mount Ararat.

The team focused on a large settlement from the transition from the Bronze Age to the Iron Age located on a northern hill terrace. Four different buildings were uncovered, the most interesting being an oval structure with large storage vessels still in place alongside a hearth. Buried here under a thick layer of ash – remains of the roof wasted by fire – were a few small objects, including a stone casting mould. The conflagration may illustrate a historical event: the invasion of king Argishti I of Urartu, whose army swept through the Ararat Valley in the beginning of the 8th century BC.

The excavations also revealed evidence for another violent conquest, this time of the Urartian settlement from the early 6th century BC. Two headless skeletons of men killed in the fighting were unearthed, as well as many iron knives and slingshot pellets. The town never fully recovered from the disaster. A number of graves from the 1st century AD that were dug into the ruins show that in time the abandoned area came to serve as a burial ground for the local inhabitants.

Three seasons of work by the Polish-Armenian team have yielded large quantities of pottery representing three millennia of occupation (from the 3rd millennium BC to the 1st century AD). Finds have also included obsidian arrow points, bone pins and awls, sardonyx and faience beads, bronze rings and decorated bone elements of horse harness. 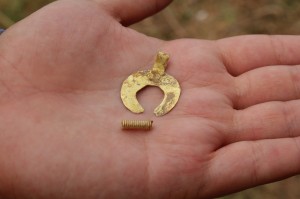 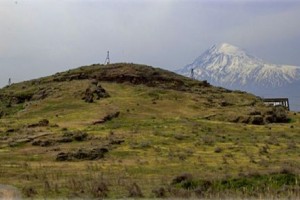