The meeting with the first woman in history who was in the office of the United States Secretary of State was held on 8th March in the Old Library building. Prof. Madeleine Albright’s visit to the UW was related to the edition of her book entitled ‘’Fascism: A Warning’’. The Polish version of the publication was released last year.

Prof. Madeleine Albright is an American politician who has been a head of the United States Department of State in the period 1997-2001. She was nominated for this office by president Bill Clinton. Earlier she worked at the White House where her duties were connected with the foreign policy. She was a member of the Woodrow Wilson International Center for Scholars at the Smithsonian Institution and was appointed the American Ambassador to the United Nations in 1993.

Prof. Madeleine Albright was a part of the academic staff at Georgetown University. She was a specialist in Eastern European studies and directed the university’s programme on women in global politics. That diplomat holds honorary degrees awarded by many institutions (e.g. the University of Washington).

In October 2018, the Polish version of her book ‘’Fascism: A Warning” was released.

Prof. Madeleine Albright was a guest at the UW when she took part in ‘’Tischner Debate” in 2008. She visited the university again on 8th March. The meeting took place at 5 p.m. in the Old Library building and was led in English by Bartosz T. Wieliński (‘’Gazeta Wyborcza”).

To apply for a press accreditation, please fill in a form until 7th March.

Watch the live streaming of the event

Warsaw ranked 1st in fDi ranking
18-02-2019
According to the latest fDi report “Polish Cities of the Future 2019/20 ”, Warsaw reigned supreme for the third time. The capital of Poland performed strongly in the economic potential, human capital and lifestyle, connectivity and business friendliness categories. 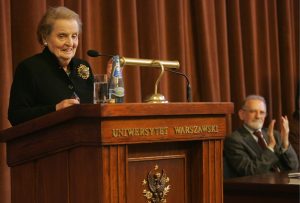