Archaeologists from the PCMA finished their first reconnaissance in Oman. It was an introduction to an Omani-Polish research project in the micro-region of Qumayrah.

The project is a cooperation between the Department of Excavations and Archaeological Studies, Ministry of Heritage and Culture, Sultanate of Oman and the Polish Centre of Mediterranean Archaeology, University of Warsaw.

The PCMA expedition, directed by Professor Piotr Bieliński, made an initial survey of four settlement sites and five burial sites in a mountain valley near the villages of Bilt and Al-Ain. The survey team discovered two further settlement sites of which at least one is of a prehistoric date.

– This season’s finds hint at it being a pre-agricultural Neolithic site, which is a very interesting phenomenon in the Near East – explains Prof. Piotr Bieliński.

The region of Qumayrah stretches over several mountain valleys. Professor Bieliński explains that from archaeological point of view, it is a very interesting area, since these valleys must have been crossed by trade routes connecting the hinterland with the coast of the Persian and Oman Gulfs. Moreover, these mountains were the source of Oman’s most precious natural resource in Antiquity – copper. By these trade routes this metal, as well as copper-alloy objects were transported. One of the main export markets was Mesopotamia, where copper objects were found, among others, in Sumerian royal tombs (3rd millennium BC).

This season was a reconnaissance in advance of fieldwork scheduled for 2016-2018. The planned field research encompasses several sub-projects. One of them is excavationg a burial ground from the Hafit period (beginning of the 3rd millennium BC) with stone tower-tombs. Another will focus on investigations of a large site, probably of a 1st millennium BC date, the ruins of which were incorporated into a later village. Work on the prehistoric site will be the next objective. 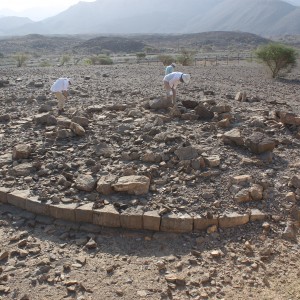 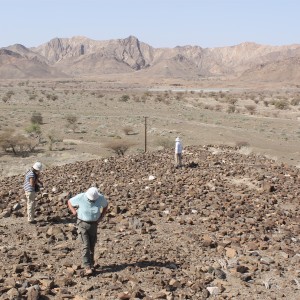