Main siteNewsLuxury on the end of the world

Luxury on the end of the world

Discovery of mosaic in Roman military therms close to Batumi.

Since 27 of June in Gonio, in ancient Roman fort of Apsarus, excavations are being held by joint expedition of University of Warsaw (The Polish Centre of Mediterranean Archaeology of the University of Warsaw and Institute of Archaeology UW) and Gonio-Apsarus Museum and Sanctuary of Cultural Heritage Preservation Agency of Ajara, Georgia (Director from the Georgian side Prof. Shota Mamuladze and from the Polish site Dr Radosław Karasiewicz-Szczypiorski).

Cooperative works were started in 2012, involved geodetic and geophysical measurements. On the basis of research most suitable place was selected for further excavations. Already in first season (2014) sections of three constructions parts of large bathhouse were traced.

Researchers, students and volunteers from Warsaw came back to Gonio this year. After three weeks of works remarkable discovery was made. Floor of one of the construction was covered in mosaic with geometric motives. Estimated reach of whole flooring is about 100 m².

Although, many floor mosaics were found in ancient Roman world, but the one found in Gonio is exceptional. This is rare example of luxury flooring in bathhouse build by military forces for their own purposes. Furthermore it is first discovery of this kind of luxury in Ajara, and one of the few in whole Georgia. Other mosaics yielded in southern Caucasus are later and usually made for local elite. Mosaic from Gonio was made for Roman garrison on the one of the furthest edge of Imperium Romanum. Early dating of this discovery is surprising. Therms and mosaic were constructed around second half of the 1st century AD. Bathhouse was erected just after first Roman garrison appeared, probably during the reign of Vespasian (69-79).

The Summer course of the Polish language
University at a glance
Tags: archeology 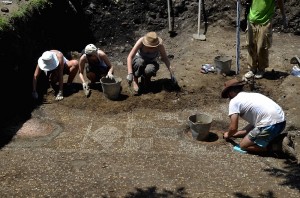 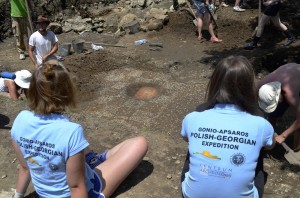