Main siteNewsENGHUM project as an example of success story

ENGHUM project as an example of success story

The European Commission published an article on the results of the “Engaged humanities in Europe: Capacity building for participatory research in linguistic-cultural heritage” project (ENGHUM). Dr. Justyna Olko from the Faculty of “Artes Liberales” was a project coordinator. According to the European Commission, ENGHUM is an example of success story from EU research.

The EU-funded project ENGHUM aimed at reaching the scientific excellence in the area of participatory action research in linguistic-cultural heritage and revitalization of endangered languages, e.g. Nahuatl in Mexico or Wymysiöeryś in Poland. An essential goal also included finding solutions for bridging collaboration and knowledge-transfer gaps between academics, members of local communities/ethnic minorities and non-academic organizations. The preservation of minority languages is not only a support for cultural diversity, it is also an investment in a more inclusive society where a wider variety of citizens can thrive.

“Going back to the language, or giving recognition to the language, is also part of the healing process for many communities that were subjected to trauma or discrimination,” says Dr. Justyna Olko in the article “Revitalising endangered languages: a service for all”.

The project was carried out from January 2016 to December 2018. UW cooperated with two partner institutions: the Department of Linguistics at SOAS, University of London and Leiden University’s Centre for Linguistics at the Faculty of Humanities and the Department of Archaeological Heritage within the Faculty of Archaeology. The capacity-building side of the project also produced exciting results. It has notably contributed to the creation of the Centre for Research and Practice in Cultural Continuity at the University of Warsaw. More information on ENGHUM

Dr. Justyna Olko has been carrying out research on cross-cultural transfer between Europe and America, as well as the revitalization of endangered languages for many years. In 2012, she received a ERC Starting grant (1.3 mln euro) for a project entitled “Europe and America in contact: a multidisciplinary study of cross-cultural transfer in the New World across time”.

Researchers who work with Dr. Justyna Olko are not only linguists and culture experts from all over the world, but also representatives of localcommunities, including speakers of Wymysiöeryś, Lemko, Kashubian in Poland, and representatives of the Isle of Man and Guernsey, speakers of Basque, Sámi in Finland and Norway, and Nahuatl in Mexico. The researchers organise workshops and capacity-building events. They support local initiatives aimed at preserving cultural and linguistic diversity of a given region, as well as co-organising cultural events. 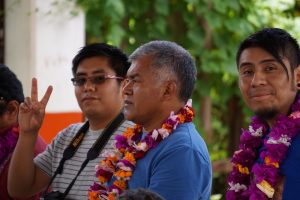 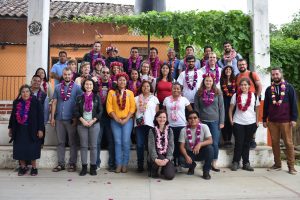