Two new University buildings have been opened. On one of the three campuses of the University of Warsaw, an official inauguration marked the opening of the new seat of the Faculty of Physics and the Centre of New Technologies.

The buildings are located in one of the three university campuses – in Ochota. They are divided by slightly over 200 metres. They were erected almost simultaneously, and the construction started in June 2010.

– I hope that the enthusiasm accompanying the discovery of new laboratories and lecture halls will also spread on research plans, education improvement plans and bold pursuit of scientific perfection, and that the best students and doctoral candidates will come here to grow into wise, well-educated human beings. I hope that we will tackle here ambitious scientific issues, unveiling before us the works of the world, and changing this world for the better – said Professor Marcin Pałys, the Rector of the University of Warsaw, during the inauguration.

– Even though the opening of buildings is, above all, a special moment for the Faculty of Physics and the Centre of New Technologies, both categorized at the highest A+ class, I, as the rector, never forget that the University is one. I see this investment from the perspective of the whole University, from the point of view of benefits that they will bring to the whole academia – said the Rector. 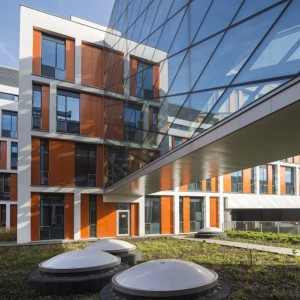 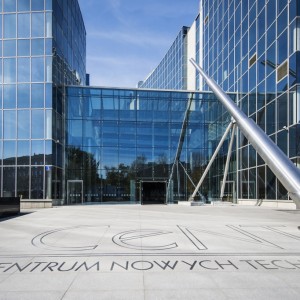 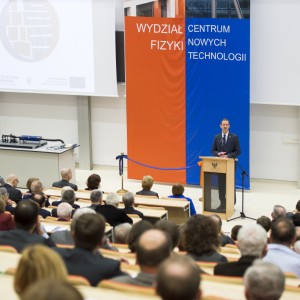 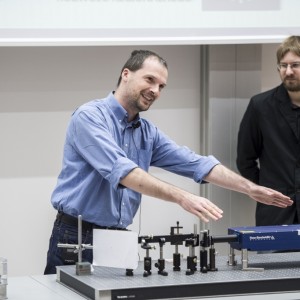 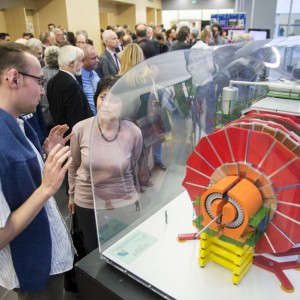 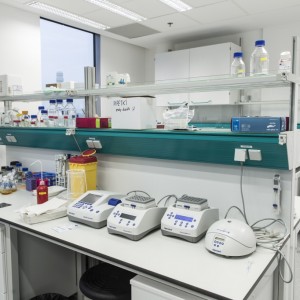 The new seat of the Faculty of Physics is the place of realisation of educational and research programmes in the field of the physics and related sciences. It is an attractive place of work for eminent scientists, an important European research centre. The seat is also interesting in architectonic terms. The complex is composed of several smaller buildings, connected by glass corridors. There is also a garden on the roof and a parking underneath the building. – We are discovering the universe in all possible scales. From gamma ray flashes from distant galaxies and processes occurring in the Earth’s atmosphere or under its surface, to studies of signals coming from the human brains, to the research of the most elementary particles making up the matter – said Professor Teresa Rząca-Urban, the Dean of the Faculty of Physics. – I hope that soon we will be able to show you our first scientific results obtained in the new building – she added.

Its modern laboratories, didactic, lecture and seminar rooms will be used mainly by the students and employees of the Faculties of Biology, Chemistry, Physics and the Interdisciplinary Centre for Mathematical and Computational Modelling. The scientists of the centre will specialise mainly in application of modern technologies in medicine, monitoring and environment protection, economy or crime detection. –  CeNT counts on cooperation with all other faculties. We will not have bachelor’s degree course, but we will eagerly join the organization of master’s and doctoral courses – said Prof. Piotr Węgleński, acting Director of the Centre of New Technologies.

“The new campus in Ochota – the buildings and centres which are being erected here – provides an opportunity for greater integration of the whole community. As a rector, I promise that I will wholeheartedly support all initiatives of interdisciplinary character, building bonds, going outside of the comfort zones of scientific disciplines”, said Professor Marcin Pałys, the Rector of the University.

“This is a day of celebration not only for the University, but for the whole Polish science. We should now think about new research projects, to fill these buildings with international scientific teams. We must invest in the intellectual capital, in people; today we cannot afford to lose talent”, said Professor Lena Kolarska-Bobińska, the Minister of Science and Higher Education.