A mission from the Polish Centre of Mediterranean Archaeology (PCMA) of the University of Warsaw is conducting the first excavations at a Medieval monastic cemetery in Sudanese Nubia.

The aim of the project, which is to incorporate the latest research methods, is the reconstruction of not just the mortuary customs in Nubian Middle Ages, but also of the sustenance strategies and the environmental conditions of Northern Sudan’s desert. The results of this research will also answer the outstanding questions as to the monks’ provenience.

In previous seasons, the excavations, headed by Dr. Artur Obłuski, the director of the PCMA Research Centre in Cairo, focused on the ruins of a Medieval monastery in el-Ghazali, which functioned between the 8th and the 13th century. A grant from the Qatar–Sudan Archaeological Project allowed for the extension of the excavations into the cemetery. Within a few months of fieldwork over 80 graves were investigated.

An interesting part of these investigations were anthropological analyses of human remains from the Southern Necropolis undertaken by Joanna Ciesielska from the University of Warsaw and Robert Stark from McMaster University in Canada. Over 95% of the skeletons belonged to men aged 20 to over 50. However, a fragment of a grave stele with an inscription in Greek commemorated a monk who died at the age of 90, after over 60 years in the order.

El-Ghazali has yielded the second largest, known so far, collection of inscribed grave stele from all of ancient Nubia. Over 200 fragments have been found, bearing prayers and pieces of information on the life of the deceased. This discovery is of special importance, as written sources from Medieval Christian kingdoms in Sudan are notoriously scarce.

The PCMA mission will be the first Polish mission in the Nile valley to conduct isotopic analyses of the excavated bioarchaeological material. They should shed light on the question of the monks’ provenance. At present, scientists argue whether the inhabitants of the monastery were native Nubians, or if they had come from the north, as suggested by the popularity of the Coptic language used in Egypt. The analyses will also provide data on the el-Ghazali monks’ diet.

Take a virtual tour of the PCMA excavations at el-Ghazali: 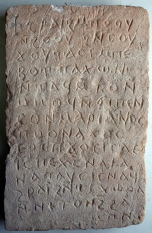 One of the grave stele. Photo taken by PCMA UW.