Dr Abdullah Al Rabeeah, the Advisor to the Royal Court and the General Supervisor of King Salman Humanitarian Aid and Relief Centre, is delivering a lecture “Who We Are – an Overview of the Kingdom of Saudi Arabia’s Global Humanitarian Work” on 14th October in the Tyszkiewicz-Potocki Palace on the University of Warsaw campus at Krakowskie Przedmieście. Prior registration is requested not later than 13th October, 14:00.

The event is organised by the Embassy of Saudi Arabia in Warsaw and the University of Warsaw.

Dr Abdullah Al Rabeeah is a Saudi paediatric surgeon. He specialises in separation of conjoined twins. He is the Head of the Surgical and Multidisciplinary Team for the Saudi National Programme for Conjoined Twins, and has performed 51 successful separations, including the separation of Polish conjoined twins, Olga and Daria from Janikowo in 2005. He held the position of the Ministry of Health, and, at present, he is the Supervisor General of the King Salman Humanitarian Aid and Relief Centre and the Advisor to the Royal Court on the humanitarian work of the Kingdom of Saudi Arabia.

Dr Abdullah Al Rabeeah chaired and participated in many national and international scientific and health committees and councils. He is an invited speaker to many national, regional and international scientific and humanitarian gatherings. He has also authored and published numerous scientific papers. Dr Al Rabeeah is the recipient of many national and international awards, including: the King Abdulaziz First Degree Medal (November 2002); the King Abdulaziz Excellence Degree Medal (November 2003); the Medal of Merit, Commander Class from the President of the Republic of Poland (August 2005); Sheikh Hamdan Bin Rashid Al Maktoum Award for Medical Sciences for outstanding medical personalities in the Arab World (December 2012), and the HH Sheikh bin Rashid Al Maktoum Tolerance Award – International Institute for Tolerance, in the Human Thought Category (February 2020).

At the University of Warsaw, on 14th October at 14:00, Dr Abdullah Al Rabeeah is delivering a lecture “Who We Are – an Overview of the Kingdom of Saudi Arabia’s Global Humanitarian Work”. 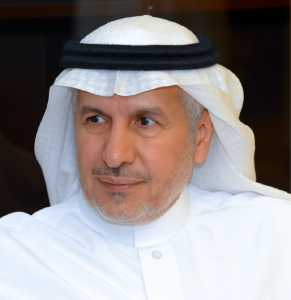 The event will take place in the Ball Room of the Tyszkiewicz-Potocki Palace, the University of Warsaw campus at Krakowskie Przedmieście. The registration for the event is required not later than 13th October, till 14:00, via potwierdzenie(at)uw.edu.pl (the number of places is limited and applications are processed in the order they are received). 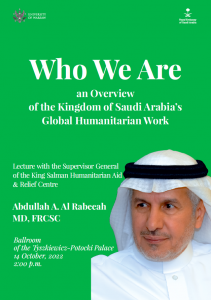