Discovery of the remains of the largest church in Old Dongola

Researchers from the UW Polish Centre of Mediterranean Archaeology, working in Old Dongola, Sudan, discovered the remains of what is probably the largest church in medieval Nubia. “This discovery will radically change the knowledge not only about the city itself but also about the history of the Nubian church,” says Prof. Artur Obłuski, the head of the Dongola expedition.

The cathedral is located in Dongola – the capital of Makuria – one of the three Christian Nubian kingdoms. Old Dongola is one of the most important archaeological sites in Sudan, currently applying for a UNESCO World Heritage List. Archaeologists from PCMA UW have been working in the Dongola region since 1964, continuing the research initiated by Prof. Kazimierz Michałowski. Since 2018, work has been carried out under the European Research Council (ERC) grant “UMMA – Urban Metamorphosis of the community of a Medieval African capital city”, led by Prof. Artur Obłuski.

The newly discovered building may have been the seat of an archbishop governing the church hierarchy over 1 000 km along the Nile, between the 1st and 5th cataracts. The archbishop of Dongola was subordinate to the bishop of Faras, whose cathedral was discovered by the team of Polish archaeologists led by prof. Kazimierz Michałowski 60 years ago. Archaeologists assume that, just like in Faras, the large church in Dongola served as a cathedral, next to which a tomb of dignitaries, probably bishops, was erected. The confirmation of this hypothesis will have significant consequences for Nubiology. Until now, another church located outside the citadel was considered to be Dongola’s cathedral, a building whose features would influence the religious architecture of Nubia over the centuries.

The building stands in the middle of the citadel surrounded by a wall about 10 meters high and 5 meters thick. The excavations show that in the Makurian period, the heart of the whole kingdom was beating there – churches, a palace and large, villa houses belonging to the church and state elites were there. Studies of the new building have yielded promising results.

“The apse is about 9 meters deep. This means that the eastern part of the building has been preserved to the impressive height of three floors of a typical block of flats. And this gives a great chance that there are more paintings and inscriptions under our feet, just like in Faras,” explains Prof. Artur Obłuski. 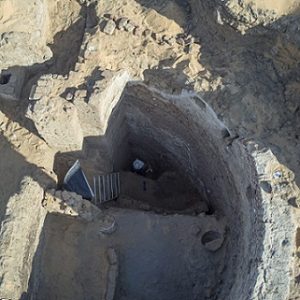 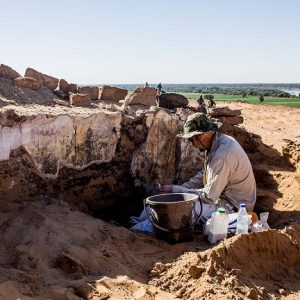 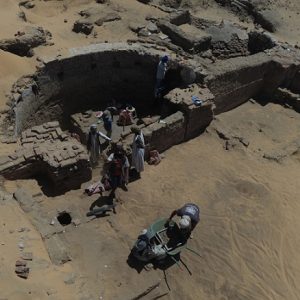 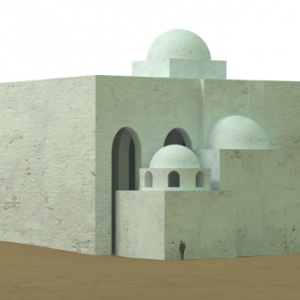 In the capital of the combined kingdoms

During the research in 2021, it was possible to clean the wall of the apse with the adjacent wall of a brick church, as well as the dome of a large tomb located in the very centre of the city. The walls of the apse, which was the most sacred place in the church, are decorated with murals depicting two rows of monumental figures. It is the largest apse so far discovered in Nubia – its diameter is 6 meters long, and the width of the church is approx. 26 meters.

“If our conclusion is correct, it is the largest church discovered so far in Nubia. It is important, but just as important, where we found it – in the heart of a 200-hectare city, capital of the combined kingdoms of Nobadia and Makuria. Just to the southeast of the apse, a large dome-covered building was added. We have a great analogy for such an architectural ensemble: Faras. There, the cathedral stood in the centre of the citadel, and to the east of it was built the domed tomb of Joannes, Bishop of Faras. With one small difference: the dome of Joannes’ tomb is 1,5 meters in diameter, this one is five times larger and is 7,5 metes,” stresses the head of the Dongola expedition.

The expedition has been organised in cooperation with the Department of Conservation and Restoration of Works of Art of the Academy of Fine Arts in Warsaw, working under the supervision of Prof. Krzysztof Chmielewski. The task of conservators is to secure the discovered paintings on an ongoing basis, and in the longer term, to prepare them for display.

The Center of Mediterranean Archeology of the University of Warsaw has been conducting excavation research and conservation work in the countries of the Mediterranean, Africa and the Middle East for over 60 years. Currently, PCMA UW carries out 25 projects in positions dating from prehistoric times, through all historical periods up to the late antiquity and the Muslim period in Egypt, Sudan, Ethiopia, Tunisia, Lebanon, Cyprus, Kuwait, Oman and Armenia. It also runs research stations in Cairo and Sudan.

The next excavation seasons in Dongola are planned for the autumn of 2021 and the winter of 2022.